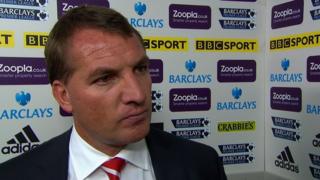 Liverpool boss Brendan Rodgers says the two penalties and red card given against his team in their 3-0 defeat at West Brom were "very, very harsh."

Daniel Agger was sent off and Liverpool conceded two penalties in four second-half minutes as Rodger's Liverpool reign get off to a terrible start at the Hawthorns.

Zoltan Gera scored a wonder goal to put West Brom in front just before half-time, Shane Long then missed a penalty before Peter Odemwingie scored from the spot.

Substitute Romelu Lukaku wrapped up the points for the Baggies with a header in new boss Steve Clarke's first game in charge.