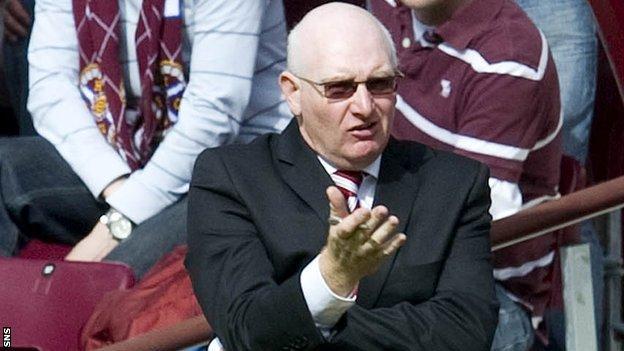 Manager John McGlynn was downbeat after his Hearts team conceded a two-goal half-time lead against 10-man Inverness at Tynecastle.

Goals by Hearts' John Sutton and Arvydas Novikovas were cancelled out by Andrew Shinnie and then Conor Pepper.

"We are obviously very disappointed. We were in the driving seat and we shot ourselves in the foot," said McGlynn.

"We've got a massive game on Thursday so there is no point crucifying people. We have to learn from these things."

Hearts play Liverpool in Edinburgh in a Europa League qualifier and will have to improve markedly to compete with Brendan Rodgers' side, who lost 3-0 at West Brom.

They went in at the interval two goals up on Terry Butcher's team and with the Highlanders having lost Richie Foran to a straight red card seconds before the half-time whistle.

But Callum Paterson fouled Graeme Shinnie in the box and Andrew Shinnie pulled a goal back from 12 yards.

Then, in the 93rd minute, Pepper's strike left Hearts smarting.

I am surprised we are still top of the table; it shows you how tight the league is

McGlynn told BBC Scotland: "If anything, we were too attacking because we drove forward with loads of bodies and if we didn't get a shot on goal or lost the ball at the edge of their box, there were big gaps and they could come out and attack us.

"We should have been a bit more patient and not committed so many bodies forward.

"We let them in on a very soft penalty and supposing it was a penalty, it was poor defending.

"We were naive to lose the goal at the end. We should have been able to see that game out, take the points and move on.

"If we'd scored the third goal it would have killed them off. We had the opportunities to do that and we didn't take them.

"I am surprised we are still top of the table; it shows you how tight the league is.

"We threw away two points today."

Hearts must wait to see whether defender Marius Zaliukas can recover from a dead leg to play against Liverpool.

"It's a bit too early to find out what the extent is and what the timescale is," said the manager.