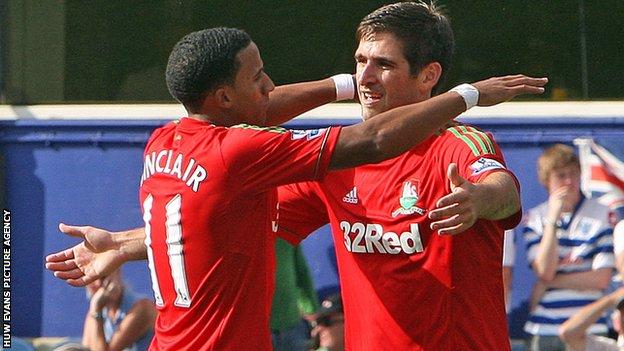 Swansea City manager Michael Laudrup wants the uncertainty over Scott Sinclair's future at the club resolved as quickly as possible.

Sinclair has told the club he will not sign a new contract and is being linked with a move to Manchester City.

The 23-year-old came on as a substitute in Swansea's 5-0 win at QPR on Saturday and scored the fifth goal.

"If something has to happen then at least the club has time to react," said Laudrup.

The transfer window closes on 31 August, but Laudrup has no hint yet of whether Sinclair will stay at the Liberty Stadium or move on.

"I don't know, I have so many experiences with players and clubs with this transfer window. So nothing will surprise me in this world," admitted the Dane, who enjoyed a successful debut as a Premier League manager at QPR on Saturday.

"We just have to see what happens every day. Every day can be a new day.

"I don't know and maybe not even Scott knows what will happen."

Laudrup admits that the Swans' hammering of QPR at Loftus Road will give the club a major boost for future away trips following their two home games against West Ham and Sunderland over the next two Saturdays.

"If you can win some games away it gives you confidence and now we have to use that confidence for the next couple of months in our away games after doing this," he said.

"We know we can do it. But it doesn't mean of course we will win a lot because it is very difficult. Every away game is a new story.

"To get three points [at QPR] was fantastic."

And Laudrup reckoned the QPR result was the best start he has ever had at a club.

"5-0 away I definitely think so. One year I won 3-0 but that was in the Danish League. It's a little different," he said.

"When you get a result like this at least you should enjoy it for two or three days which we will do. From Tuesday-Wednesday we will focus on West Ham. That's how it should be."