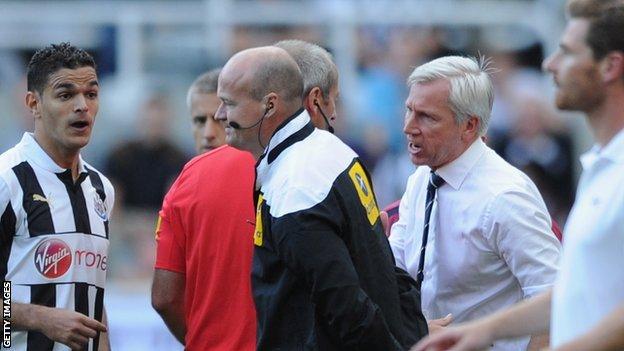 Newcastle manager Alan Pardew has been fined £20,000 and given a two-match touchline ban for pushing an assistant referee during the 2-1 win over Tottenham on 18 August.

Pardew did not contest the Football Association misconduct charge imposed after he shoved Peter Kirkup following the award of a Tottenham throw-in.

Pardew will be banned for the Premier League matches against Everton at Goodison Park on 17 September, and the home game against Norwich City on 22 September.

Pardew apologised to the match officials immediately after the game.

"I went in and said I'm sorry [to the referees] and said I would have to apologise publicly too because it was ridiculous," he said after the game.

Pardew said he had reminded his players about their behaviour before the game, telling them to follow the example set by competitors at the London Olympics.

"I was saying to the players about the great Olympics and how to set an example and there's me pushing the linesman over," he added. "It was comical. He just happened to be right in front of me."

The incident was mentioned in referee Martin Atkinson's report.