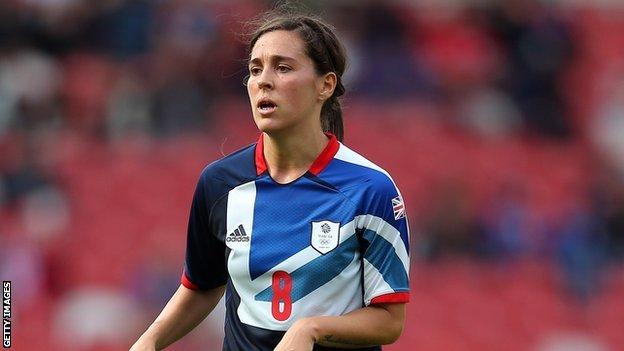 Nine of Team GB's Olympians were on view as Arsenal twice came from behind to draw 2-2 at Everton in their top-of-the-table Women's Super League clash.

England and Team GB winger Karen Carney was on target in Birmingham City's 3-1 win against Lincoln.

Everton's biggest crowd of the season, 618 - almost 100 up on the WSL's average for the first half of the season - was in attendance to watch the returning Olympians.

And they saw Team GB colleagues Fara Williams and Kim Little put their names on the scoresheet, England's Williams for the Toffees and Scotland's Little for Arsenal.

Midfielder Williams opened the scoring with a fine individual goal in the 35th minute, sliding the ball home after a 40-yard run.

A foul on striker Gemma Davison by defender Lucy Bronze led to the 55th-minute penalty from which midfielder Little equalised.

Bronze made amends for her costly error 12 minutes later when, in a goal-mouth melee, she scrambled the ball into the net to put her side back in front.

But with 12 minutes remaining substitute Jordan Nobbs struck with an excellent shot that went in off the crossbar to earn the visitors a point.

Birmingham almost took an early lead when Carney struck a shot against the crossbar.

But they went ahead in the 18th minute, striker Jodie Taylor latching onto a Chelsea Weston pass and going round goalkeeper Nicola Hobbs to slide the ball home.

But Blues doubled their lead two minutes before the interval when midfielder Jo Potter's half-cleared corner was smashed into the net by right-back Weston.

Victory looked assured for the home side when Carney delightfully curled in a 25-yard free-kick on the hour.

Three minutes later though, Lincoln gave themselves a come-back chance with a goal from close range by midfielder Bonnie Horwood.

But Blues held on for a victory that lifted them to third in the table.

It could have been worse for manager Beard and his team as the margin of defeat would have been far greater but for the heroics of goalkeeper Nicky Davies.

The keeper made early saves from Nikki Watts and Jess Fishlock before keeping out a Fishlock penalty following a handball by Nicky Harding.

Davies then pulled off a fine double stop, denying first Fishlock then Del Rio as the home side continued to press for a first-half goal.

Academy maintained their grip after the break and were finally rewarded when Del Rio at last found a way past Davies in the 72nd minute.

Chelsea dominated throughout but had to wait until 15 minutes from time to grab the winning goal through midfielder Laura Coombs.

Midfielder Helen Bleazard and striker Helen Lander both went close in an early onslaught by the visitors.

Defender Sophie Ingle and midfielder Adriana Martin then failed to find the net as chances continued to come and go.

But Coombs clinched a deserved three points for Chelsea when she drilled a 15-yard shot into the net from midfielder Dunia Susi's pass.