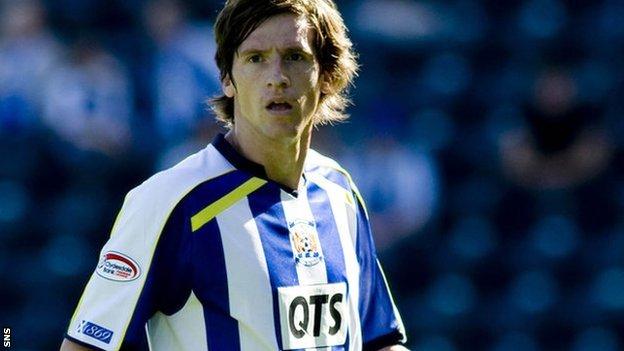 Kilmarnock boss Kenny Shiels is confident that new signing Borja will provide his side with an attacking spark.

The Spanish playmaker signed a one-year deal with the Ayrshire club last week and made his debut from the bench in the 2-1 defeat by Motherwell.

"He's going to be good in about three games' time," said Shiels.

"At the moment he hasn't had much game time, he played in a bounce game against Sheffield Wednesday."

Shiels said it was too soon to start the 30-year-old Borja, who had previously been with Spanish second-tier outfit Alcorcon.

"We couldn't start him as he isn't up to fitness yet," said the manager.

"But, when he's ready, I'm hopeful he will provide us with some extra imagination."

Shiels again bemoaned the lack of a cutting - and creative - edge having lost midfielder son Dean to Rangers this summer, while striker Paul Heffernan is injured.

"We need someone to hold up the ball a bit better and link it up," said the Kilmarnock boss.

"We are missing Heffernan and you can see how it has an impact on our performance."

Kilmarnock's summer signing from Livingston, Rory Boulding, started up front against Well, while Borja was a second-half substitute.

"It's early yet and too early to make assessments, it could have so easily been a draw today," said Shiels.

"But I still feel if you take Harkins out then we lack creativity.

"I think it could have went either way, we were playing against a counter-attack team and we knew going into the game that Motherwell are a dangerous team away from home.

"It was poor play for the first goal and the second the player wasn't tracked.

"We have to look at the imagination side and work on that in the next week."