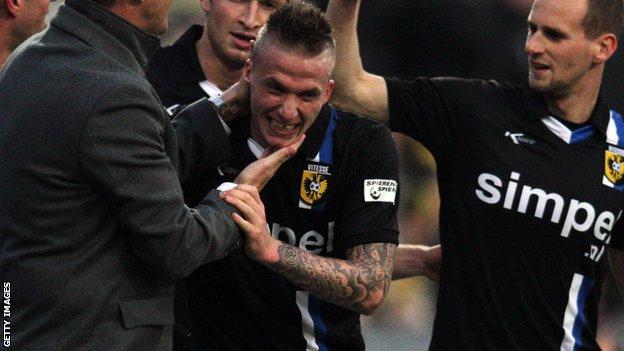 Manchester United have completed the signing of Alexander Buttner from Vitesse Arnhem for an undisclosed fee.

The Dutch left-back, 23, who came close to joining Southampton earlier this summer, has signed a five-year deal.

Dutch football commentator Mark Van Rijswik speaking to BBC Radio 5 live: "When the news came through about Manchester United it was a very big surprise in the Netherlands that he would make that kind of move. He's decent but he's nowhere near someone like Patrice Evra, so no-one really understood it."

Buttner was picked in the Netherlands' provisional squad for Euro 2012 but was not selected for the tournament.

"Alexander is one of the best young left-backs in Europe and we're delighted to sign him," United manager Sir Alex Ferguson said.

"He's someone we've been watching for a while now. He gives us some really exciting options in that position."

Buttner, who has spent his entire career with Vitesse, said: "Joining Manchester United is one of the best days of my life.

"It's a team I have admired for many years now and I can't wait to join my teammates and play my part in helping the club be successful."

Ferguson has been in the market for cover for first-choice left-back Patrice Evra all summer after allowing Fabio to join QPR on loan for the season.