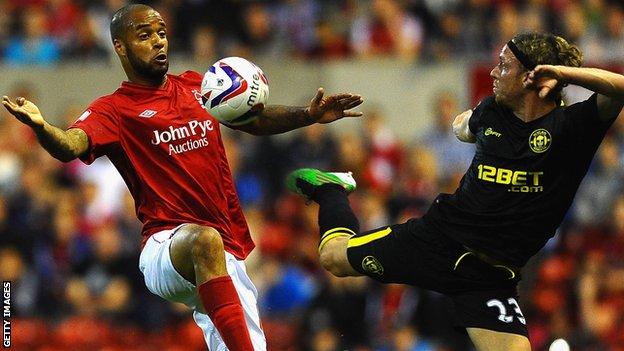 Nottingham Forest's unbeaten start to the season came to an end as Wigan scored three first-half goals in the second round of the Capital One Cup.

Antolin Alcaraz was sent off for Wigan but the Latics still added a fourth through substitute Callum McManaman.

Sean O'Driscoll's Forest side have started the season well in the Championship, but they were unable to produce an upset against a Premier League club which has been knocked out of the cup by lower league clubs five times in the last eight years.

Wigan manager Roberto Martinez made seven changes to the side which beat Southampton 2-0 at the weekend.

And it was Argentine striker Boselli, making a rare appearance in a Latics shirt, who opened the scoring with a close range header after meeting Stam's 25th minute cross.

Full-back Figueroa added a second goal 10 minutes later with a stunning effort from 30 yards before Gomez raced on to the end of Albert Crusat's ball and lashed home a blistering strike to make it 3-0.

Forest were largely lacklustre but hit back two minutes into the second half when Cox scored from long range.

Wigan were reduced to 10 men for the last 12 minutes when Alcaraz made a rash challenge on Guy Moussi to earn his second yellow card.

But the visitors still added a fourth, substitute Ryo Miyaichi setting up McManaman, who sealed an easy win with a simple finish in the 90th minute.

Nottingham Forest manager Sean O'Driscoll: "Wigan have got quality. Whether they play with nine men, ten men, 11 men, they're not going to change the way they play.

"I've just said to the boys afterwards that's where we want to be, that's the type of football we want to play.

"But it will take some time - we understand that - but we've got to work on it day in and day out."

Wigan boss Roberto Martinez: "I was very pleased with the whole game.

"I thought the first half when you get the clinical finish it is very pleasing but it was a game full of good football, great goals from both teams.

"For a team that has made seven changes and hasn't played very much together, to be able to cope with going down to 10 men I was very pleased."