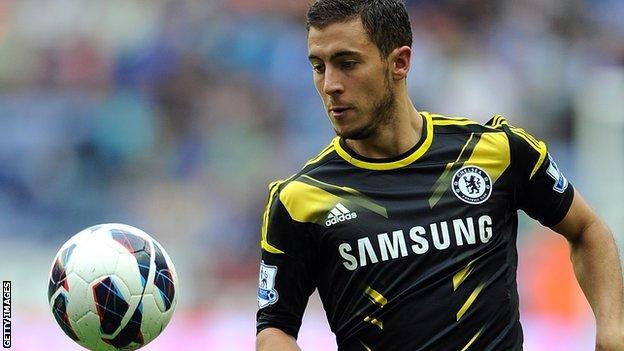 Belgian Hazard, signed for a reported £32m from Lille, enjoyed an outstanding Premier League debut for Chelsea, setting up both goals against Wigan.

"Gianfranco was a wonderful talent, an artist - Eden might become an artist as well," said Chelsea boss Di Matteo.

"After one game, it's probably a bit too early, but he had a good start."

Di Matteo continued: "It certainly gives him and the others confidence, starting with a new club like that.

"He's a talented man, a talented young boy. We'll have to see how he grows into a man, and how quickly he will be an important player for Chelsea."

Although midfielder Hazard has a long way to go to reach the Italian's level, his incisive pass to Branislav Ivanovic for the opener against Wigan and the mesmerizing skill with which he also won a penalty suggest he is on the right path.

Chelsea face Reading on Wednesday night. Royals manager Brian McDermott revealed he has long been a fan of the Belgian international.

He first spotted him on a scouting trip five years ago but admitted the then 16-year-old was never a realistic target for the Berkshire club.

"You can't go to a place like Lille and say 'we'll take your best player'. It just doesn't happen," McDermott said.

"He was phenomenal and everyone there knew at 16 what a talent he was going to be. He stood out like the proverbial sore thumb."