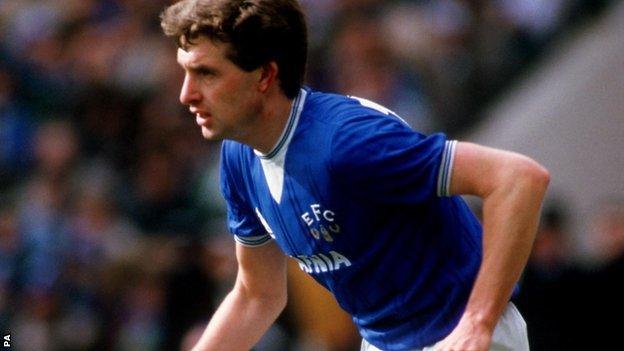 Former Everton midfielder Kevin Sheedy believes early detection has saved his life after surgery to treat his bowel cancer was deemed a success.

The tumour and lymph glands were removed and have tested 'all clear'.

It really helped me deal with my situation, knowing so many people were rooting for me.

The academy coach and scorer of 97 goals in 369 appearances for the club will not require further treatment.

"My life has been saved through early detection. I would like to thank everybody who sent me messages of support," said the 52-year-old.

In a 10-year playing career with the Goodison Park club, the former Republic of Ireland international won the Football League twice, the FA Cup and European Cup Winners' Cup.

"I would strongly urge anybody who has concerns to go immediately to their GP," said Sheedy, a member of the club's coaching team since 2006.

"I am told that over 90% who are diagnosed at the earliest stage are successfully treated. Don't be embarrassed to go otherwise you could die of that embarrassment."

Sheedy, a former assistant manager at Tranmere Rovers and Hartlepool United, said he had been touched by the messages of support from around the world.

"It really helped me deal with my situation, knowing that so many people were rooting for me," said Sheedy, who joined Everton from Liverpool in a £100,000 deal in 1982.