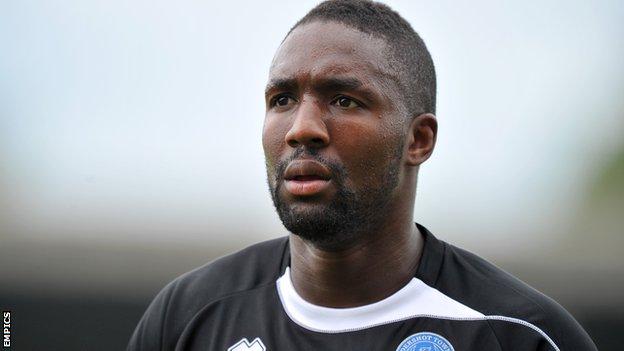 Aldershot Town striker Michael Rankine says it will take him a few more games to get back to his best.

The 27-year-old, who missed the second half of last season through injury, has scored once in three games this season.

"I'm not getting many chances and I'm not really striking the ball as cleanly as I like to," he told BBC Surrey.

"That will come because I've been out nearly seven months and I didn't get that much game time in pre-season. I'm trying to catch up now."

He added: "Hopefully by six or seven games, if selected, I'll be back firing."

Rankine, who joined the Shots on a free transfer last summer, scored five goals in 30 appearances before his season was cut short by a knee problem in early January.

He says his time on the sidelines was one of the most challenging times during his career.

"It was heart-wrenching because it was the first proper injury I had," he continued.

"There were a couple of complications and it was a hard time. Hopefully it's made me stronger.

"There's only so much you can stand of a physio room.

"As much as the physio is good, it's a lonely place and a little bit depressing."

If Craig Reid and I play more games together and get that understanding, we can set the league on fire

The former Rushden and York man scored his first goal since last November in the Carling Cup defeat by Wolves earlier this month.

"Every goal is special for me because I don't get as many as I'd like to get," Rankine said.

"My uncle [retired midfielder Mark Rankine] used to play for Wolves so it meant the world to me.

"It also got a chip off my shoulder, knowing that I can score goals. But it's got to continue through the league.

"Hopefully I can stay injury free and score some goals."