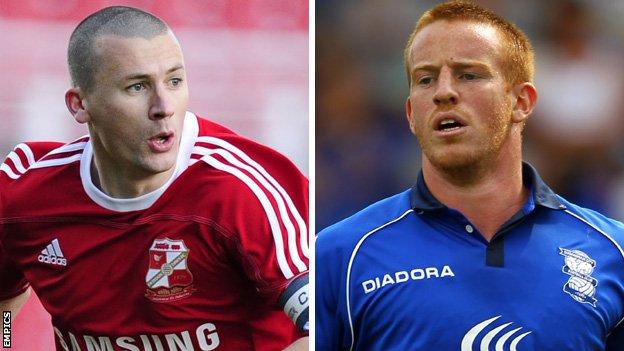 Defender Paul Caddis has left Swindon Town for Birmingham City on a season-long loan, with striker Adam Rooney going the other way.

Caddis, 24, was stripped of the Town captaincy earlier this month following a disagreement with manager Paolo Di Canio and has not played since.

Rooney, also 24, is half-way through a two-year deal at St Andrew's.

He joined the Championship club from Inverness last summer and scored seven goals in 27 appearances.

The forward started his career at Stoke City and enjoyed loan spells with Yeovil, Chesterfield and Bury before moving to Scotland.

The Italian appointed him as captain last October after previous skipper Oliver Risser lost his place in the side, and the defender went on to lead Swindon to the League Two title in May.

Caddis signed a contract extension to tie him at the club until 2014, but his future was put in doubt following a pre-season fall-out with Di Canio.

The manager implied Caddis had not worked hard enough during the close season and had become complacent since becoming a father for the first time, something the player strenuously denied.

Speaking two weeks ago, the right-back insisted he still had a future at Town but was then excluded from the squad for all five competitive games during the early stages of the season.