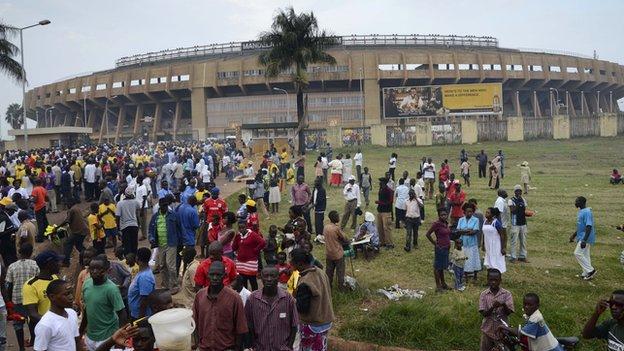 This year's East and Central Africa Senior Challenge Cup (Cecafa Cup) will be played in Uganda and not Kenya as originally planned.

General secretary of the region's ruling body Cecafa, Nicholas Musonye, said they have had to make the change after the tournament sponsors, East African Breweries Limited (EABL) made the request.

"The sponsors raised their concern over the organizational abilities of Football Kenyan Federation" he explained.

"The sponsor has the final obligation to make their decision where they want the tournament to be held. It's Uganda and that is their stand."

"The Federation of Uganda Football Associations (Fufa) has already named a 10-member committee to organise the event which will be played at Kampala's Namboole national stadium (pictured) between 27 November and 12 December 12," he explained.

"We have received entry confirmations from all the [12 Cecafa] teams and there is a possibility of having several guest sides from Southern Africa as well."

But Kenya and South Sudan, who are set to take part in the tournament for the first time, have criticised the switch of venue.

"We, as a new member of the regional body were informed initially that Kenya were the hosts," Ghabur Goc Alei, the South Sudan Football Association president said.

"We shall lobby other member countries of Cecafa to ensure decisions made at the Congress are respected."

Uganda are the reigning champions and the most successful of the 12 members of Cecafa having won the Senior Challenge Cup 12 times.