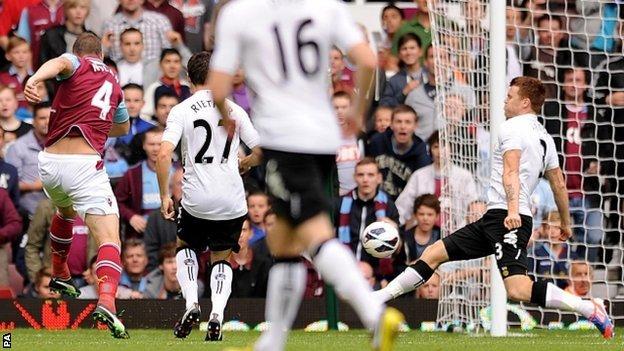 Andy Carroll set up two goals on an impressive debut as West Ham cruised to victory against woeful Fulham.

Carroll dominated the away defence and set the Hammers on the way after 53 seconds when his header let Ricardo Vaz Te tee up Kevin Nolan to fire home.

Winston Reid powered in a free header from a corner to make it 2-0.

Carroll, who later limped off with a tight hamstring, also played a part in the Matt Taylor strike which wrapped up back-to-back home Premier League wins.

Carroll, who has joined on a season-long loan, left the Upton Park pitch to a standing ovation after 68 minutes and is likely to miss England's upcoming World Cup qualifiers against Moldova and Ukraine.

But by that time the £35m forward had already played a huge part in a victory that was secured with a rampant first half-display by the home side.

Carroll was undoubtedly the catalyst, with his physical threat and aerial presence giving the Hammers a cutting edge and creating a platform for Taylor, Mohamed Diame and the excellent Vaz Te to run at a constantly exposed home defence.

That was evident within a minute as Carroll's header allowed Vaz Te time to pick out Nolan, who drilled a fabulous first-time finish back across Mark Schwarzer and in at the far post.

Fulham offered little response to the fastest Premier League goal of the season and appeared to badly miss the presence of influential midfielder Mousa Dembele following his move to Tottenham.

Steve Sidwell, Mahamadou Diarra and new recruit Kieran Richardson failed to get to grips with the pace and movement of West Ham's midfield, which was brilliantly led by Diame and Mark Noble.

While Carroll will rightly take most of the plaudits, Vaz Te's pace and willingness to run at the visiting defence provided the biggest goal threat.

He went close with a near-post effort and also played a fine crossfield pass which saw Carroll nod the ball back to Diame whose strike was tipped onto the bar by Schwarzer.

A second home goal seemed inevitable and came when Reid was allowed a free run at Taylor's inswinging near-post corner to head home from six yards.

"The game was dominated by Andy Carroll. He made all the difference between the two teams in the first half and the game was over by half-time. Fulham were better after the break but just couldn't deal with Carroll. West Ham fully deserved their win."

Fulham had barely threatened, with long-range efforts from Damien Duff and Steve Sidwell as much as they could muster, and they could have no complaints at being 3-0 down at the interval.

Carroll's presence from a free-kick drew the attention of three home defenders and when the ball broke loose, Taylor reacted first to smash a low half-volley into the corner of the net.

Brede Hangeland almost got a goal back on the stroke of half-time but Fulham never looked like getting back into the match despite an improved second-half performance.

Their main hope came in the form of their own deadline day recruit Dimitar Berbatov, who showed flashes of his undoubted quality during an encouraging appearance as a second-half substitute.

He nearly teed up a late goal for Hugo Rodallega, whose shot forced a decent block from Jussi Jaaskelainen, while Duff also went close.

But West Ham had already done the hard work before the break and were able to sit deep, defend their lead and ease to victory.

Fulham manager Martin Jol on his side's failure to deal with Andy Carroll:

"If you are 5ft 8ins or 5ft 10ins tall maybe you have got a problem but we should have coped with it.

"Every game you see him, in the European Championships, you see he is good in the air, he is probably the best in the Premier League but I still feel there are a few answers for that but we couldn't cope with that.

"The only positive for today was to see Dimitar Berbatov again and to see his class and quality, I have missed it.

"What I did see was Berbatov brought other players into his play and that is his quality. Hopefully with Bryan (Ruiz) available for the next match...we should be a bit more positive.

"I tried everything but we missed out on a couple of players yesterday and in the end we have to be happy that Berbatov is there and Rodallega and Petric.

"Dembele, I really felt he would have stayed because £15m is a big clause, but they paid up and they always do that in the last week, I know that from my time there so it made life miserable for me."