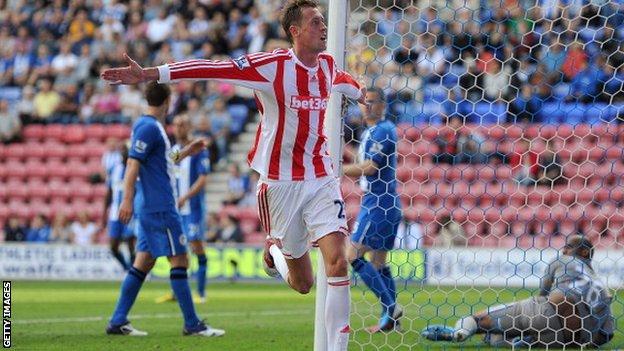 Peter Crouch earned Stoke a point after Franco Di Santo looked to have secured Wigan victory at the DW Stadium.

Walters had earlier levelled from the spot after Maynor Figueroa handled, which cancelled out Shaun Maloney's penalty that Robert Huth had conceded.

Adam, who joined on Friday in a £4m deal from Liverpool, started his first match for the Potters on the substitutes bench.

But the Scot lifted his team-mates after replacing Andy Wilkinson, who suffered a first half head injury, in what was the former Blackpool player's first taste of Premier League action since March.

With the scores locked at 2-2, Adam thought he had scored a late winner with a deflected free-kick, which clipped Gary Caldwell, only for Al Habsi to produce a full stretch stop.

The Wigan keeper had become a father for the second time overnight, but the Oman international was alert to frustrate Adam.

Despite a battling point, Stoke have now gone nine Premier League games without a win, their last top-flight success coming against relegated Wolves at the Britannia Stadium on 7 April.

It would have been harsh on the Latics had Adam scored.

Wigan enjoyed plenty of possession and twice led only to be pegged back by a spirited Stoke side who restored some much needed pride after a surprise midweek League Cup exit at the hands of Swindon.

Roberto Martinez's team were the better side before the break, Stoke only coming to life after Adam replaced Wilkinson in the 36th minute.

By then the Latics should have doubled their lead, Arouna Kone squandering a great opportunity from close range after Emmerson Boyce had hooked Di Santo's centre across the six-yard area.

It proved a costly miss as Stoke levelled in the 40th minute, Walters scoring from the spot after referee Martin Atkinson had adjudged Figueroa of handling the ball inside his own area.

Having been comfortable for long periods of the half, Wigan went in at the interval fortunate to be still on level terms after Marc Wilson rattled the bar from 20-yards.

Yet Stoke's momentum was banished by Di Santo's exquisite 49th-minute finish, the Argentine picking his spot from just inside the area after Kone had done well to hold up possession while under pressure.

Stoke, however, refused to lie down and secured a hard-earned point when Crouch scored his second goal in nine Premier League matches after meeting Walters' cross six-yards out.

"I think the best compliment you can say [regarding Al Habsi's late save] is that we are not surprised any more.

"Ali keeps producing this level. Since he arrived at the DW Stadium he has become a bit of a hero and that is why - because when you really need him, he is always there.

"We started really brightly and got the goal we deserved, but then you are looking at the manner in which the game opened up and it could have gone either way."

"It was touch and go whether I started him [Charlie Adam] or not.

"When he came on I thought the game had opened up a bit, and he is a good passer of the ball.

"They are away now for internationals which is disappointing for all of us, but hopefully he will get bedded in to what we want to do and the way we want to use him, and he will be a great asset for the football club."