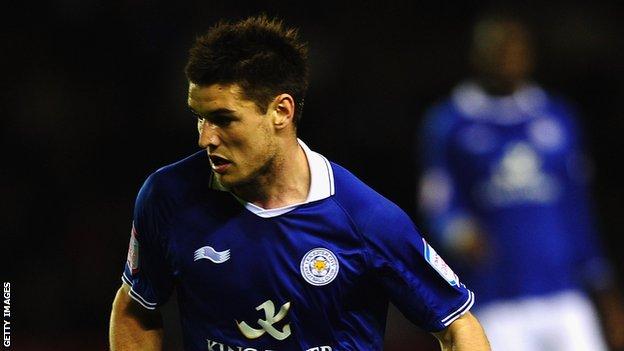 The Foxes dominated from the outset at King Power Stadium, with Jamie Vardy causing problems in the first half.

And the visitors scored nine minutes into the second half when Vardy was fouled inside the box and Marshall powerfully drove home the spot kick.

Alex Baptiste prevented the defeat from being by a bigger margin when he blocked Lloyd Dyer's stinging effort.

Despite the loss, Blackpool remain top of the Championship, having collected nine points from the first four games of the season.

Ian Holloway's side went into the game brimming with confidence following their 6-0 rout of Ipswich last time out.

However, they failed to replicate such attacking prowess at Leicester as the hosts took control from the start.

Vardy had a third-minute shot saved by Matt Gilks, before the striker saw another effort blocked by Barry Ferguson midway through the first half.

But Leicester had to wait until the 54th minute to open the scoring when Vardy tumbled under a challenge inside the area and referee Michael Jones pointed to the spot.

Skipper Marshall stepped up and confidently smashed the penalty into the back of the net.

Baptiste bravely denied Dyer from adding a second with a close-range effort as Leicester pushed for a second.

They had to hold on in the closing few minutes, as Blackpool pressed for a late equaliser, but Leicester held firm to secure the three points.