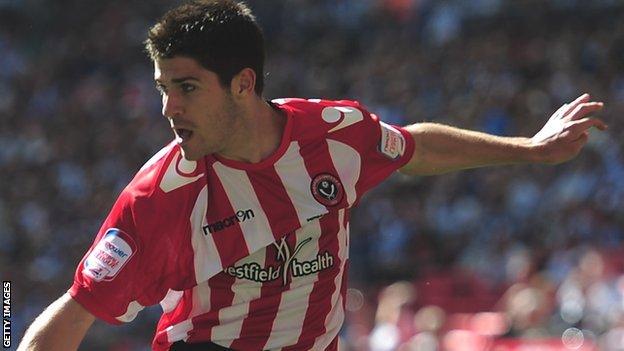 Ryan Flynn scored twice as Sheffield United came from behind to record an entertaining win over Bournemouth.

Tommy Elphick headed the visitors in front, before Flynn equalised from close range and then made it 2-1 with a low, curling effort from 12 yards.

John Cofie added a superb strike, Lee Barnard headed in for the Cherries, but Richard Creswell nodded in for 4-2.

Marc Pugh replied from 25 yards, but Nick Blackman made it 5-3 from the spot after being felled by Josh McQuoid.

The Blades had unveiled their newly-renamed stand in honour of local Olympic hero Jessica Ennis before the match, with five of the eight goals scored at that end.

"I don't think you can come to Sheffield and gift them goals, which is what we've done.

"If you give up goals the way we did, then it makes your job incredibly difficult whether you score three goals or not.

"Individual errors that we've made, they've got to stop, otherwise they cost you."