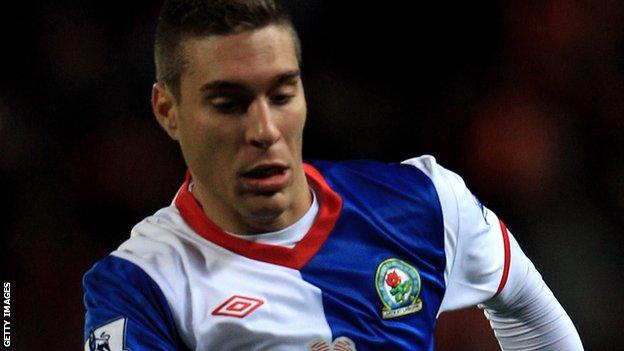 A late Ruben Rochina strike ensured Blackburn left Elland Road with a point as an entertaining encounter with Leeds ended in a draw.

Rovers, who handed a start to new £8m striker Jordan Rhodes, were 2-0 up after 30 minutes with goals from Marcus Olsson and Nuno Gomes.

Luciano Becchio then gave Leeds the lead before Rochina struck for a point.

Blackburn's new signing Rhodes was put straight into the first 11 after moving from Huddersfield on Thursday, with two-goal striker Colin Kazim-Richards out injured.

However, it was a long-serving Blackburn player who had a key role in the visitors taking the lead as Morten Gamst Pedersen threaded through a 19th minute pass for Olsson to run on to and he drove a first-time effort across Paddy Kenny and into the net.

Eight minutes later and it was 2-0 as this time Olsson found former Portugal striker Gomes, who made no mistake to score his second goal in four games.

Diouf, fresh from signing a contract that will keep him at Leeds until January, grabbed a lifeline for Leeds four minutes before the break, smashing home at the back post after Blackburn failed to clear.

Leeds were level 11 minutes into the second half when McCormack chased Adam Drury's pass before volleying beyond former Leeds keeper Paul Robinson.

It got even better for the hosts with 65 minutes gone as Becchio nodded home his fifth of the season, with the Blackburn defence again caught flatfooted.

That was not the end of the drama, though, as Blackburn secured a point when Rochina finished from close range with six minutes remaining.

"It was a roller-coaster game and looking back we will think it was a decent point, but at two up we were in total control.

"If we had gone in two goals up at half-time I think we would have won but full credit to Leeds. They had a real go.

"We have gone four league games unbeaten which is a solid start."

"The game was a good advert for the Championship but we were disappointed that the referee gave a free-kick against Tom Lees when [Morten Gamst] Pedersen backed into him in the build-up to their third.

"It was disappointing to be denied a win by a decision like that but I am so proud of my team for battling back from two down."