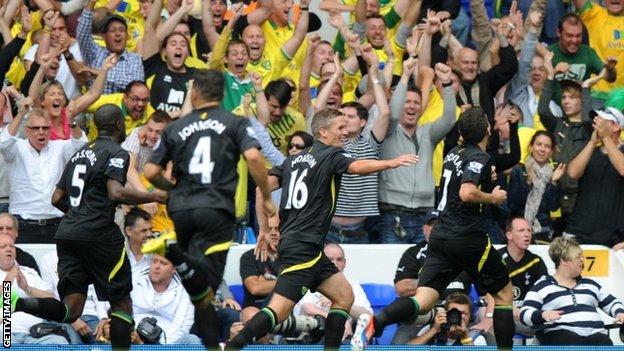 Mousa Dembele had put the hosts on course for their first league win of the season with a goal on debut.

But, with time running out, the Norwich midfielder found the space to unleash a low left-foot shoot that flashed beyond Spurs goalkeeper Brad Friedel.

Substitute Tom Huddlestone was shown a straight red card in the 90th minute.

"Spurs have thrown away a lead for the second week running which hasn't gone down well with the fans. Goalkeeper Brad Friedel made a real statement here to Hugo Lloris, who they bought yesterday, and but for him Norwich might have had all three points."

Boos echoed around White Hart Lane at the final whistle, with Andre Villas-Boas still without a competitive win as Tottenham manager.

There could be little dispute about the result, however. It was just reward for Chris Hughton's powers of organisation on an emotional day for the Norwich manager as he returned to the club where he had spent 28 years, as a player and then a coach.

Villa-Boas could not afford to accommodate such sentiment. Having been beaten by Newcastle on the opening day and frustrated by West Brom last weekend, the pressing need for points and for that elusive first win was at the forefront in his mind. The wait goes on.

This was a performance that epitomised Spurs' faltering progress so far this season: style but no substance, beauty but no brawn, panache but no penetration. Dembele's goal apart, Villa-Boas's side lacked confidence, cohesion and sustained threat.

In contrast Norwich pushed and probed, frustrated and confounded their more celebrated opponents and their uncomplicated, direct approach put Spurs under serious duress. For a period during the second half it appeared Spurs might snatch victory thanks to Dembele's heroics but Snodgrass found the net with five minutes remaining.

Norwich might have stolen all three points but for the brilliance of goalkeeper Brad Friedel.

Twice during the first half the 41-year-old showed his apparent replacement, that he will have to be at his very best to displace him, first tipping Russell Martin's thundering header onto the crossbar before throwing himself to his right to prevent Snodgrass's clever header.

Norwich maintained their momentum after the interval as first Grant Holt headed over from six yards, before winger Anthony Pilkington drew another important save from Friedel.

The introduction of the and Emmanuel Adebayor shortly after the interval did alter the game, however. The former Fulham midfielder burst forward after 67 minutes, exchanging passes with Defoe and spinning beyond his defender before thumping a low shot across Norwich goalkeeper John Ruddy into the net.

Aware that his team surrendered a 1-0 lead in injury-time last weekend, Villas-Boas brought Huddlestone on for his first game in just over a year but the visitors kept coming.

They were denied a penalty when Benoit Assou-Ekotto appeared to pull substitute Steve Morison's shirt in the box with time running out but when Pilkington found Snodgrass in the penalty area with five minutes left, the former Leeds midfielder thundered home through a crowded penalty area to empty salt into an already raw wound.

There was more disappointment for Spurs when Huddlestone was given a straight red for a mistimed tackle on Jonny Howson, while Bradley Johnson almost won it in injury time, only for Friedel to deny him again.