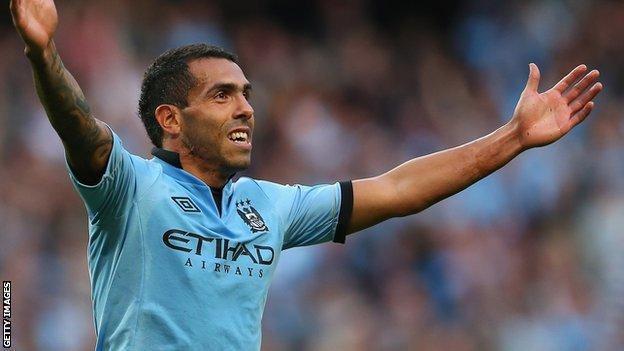 Manchester City maintained their unbeaten start to the season with victory against Queen's Park Rangers at The Etihad.

The Premier League champions were watched by Real Madrid coach Jose Mourinho ahead of their Champions League meetings - and he saw City win despite a performance that was not entirely convincing.

"Manchester City manager Roberto Manicini's 100th Premier League game in charge yielded a 62nd victory. The win was clinched by Carlos Tevez in stoppage time. Until that moment QPR had made it a little uncomfortable for them."

Yaya Toure gave City the lead in a first half they dominated completely but QPR shocked Roberto Mancini's side when Bobby Zamora levelled entirely against the run of play on the hour.

City were back in front through Edin Dzeko inside two minutes before Carlos Tevez added a third in stoppage time to end any lingering anxiety from the home supporters.

This was a repeat of the momentous fixture on 13 May when Sergio Aguero's injury time goal gave City their first title in 44 years, but there was little of that sparkle surrounding this day and for Mancini this was ultimately about getting the job done.

QPR boss Mark Hughes harboured hopes of an unlikely point for periods in the second half but much of his body language spoke of frustration at his side's failings and there is little doubt he will be eager to use many of the new players who have fleshed out his squad in recent weeks.

City spent £38m on the final day of the transfer window - but £6.2m Scott Sinclair was the only new face on show on the bench.

QPR have embarked on a wholesale reconstruction of their squad since avoiding relegation despite losing at City on the final day of last season and boss Hughes gave an immediate debut to £8m purchase from Real Madrid Esteban Granero.

Apart from one shot at goal, Granero had little more than a watching - or more precisely running - brief as City dominated possession to an almost embarrassing degree in the first half.

City, perhaps to their frustration, had only one goal to show for their superiority at the interval after Toure scored through a crowd after QPR failed to clear a corner they had contested.

Fabio da Silva, on loan from Manchester United, had already cleared Dzeko's header off the line as QPR were penned in their own half for almost the entire period.

The pattern continued after the break as QPR keeper Robert Green blocked Dzeko's shot and Pablo Zabaleta's curling effort hit the bar after he was played in by David Silva.

The shock stung City into action and they were back in front inside two minutes when the tireless Tevez pulled back for Dzeko to head in at the near post.

Despite controlling so much of the game, the champions had not wrapped up the points and they had a moment of concern with 12 minutes remaining as Ryan Nelsen just failed to meet Granero's cross at the far post.

It was the last serious threat and the excellent Tevez completed the formalities in the closing moments when he touched Dzeko's shot past Green.