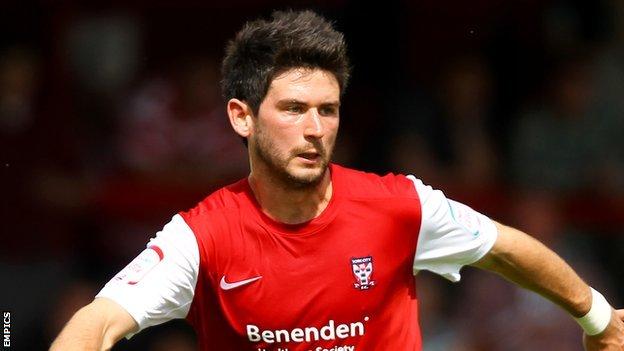 York City midfielder Patrick McLaughlin scored at both ends as they beat Oxford to end United's 100% start to the League Two season.

U's striker Deane Smalley had a penalty saved by Michael Ingham before Ashley Chambers made it 2-0 from 16 yards out.

McLaughlin deflected Adam Chapman's corner into his own net, before making amends after Michael Raynes' error.

The result, York's first home win in the Football League since January 2004, knocked Oxford off top spot in the table.

"We were 1-0 up and then obviously a penalty (for them) and a great save from Ingham. He's pulled off a couple of great saves in the first half which enabled us to go on and win the game.

"It was a weird day for us and since then we've shown what we've got with seven points in the last three games."

"We should have got three points, without a shadow of doubt. We beat ourselves.

"We conceded three really poor goals and the timing of the first one was ridiculous.

"We'll look at this and wonder how we have not won. We haven't won because we've gifted three really poor goals to the opposition.

"We've had 17 crosses in the first half but haven't picked out the right run to score."