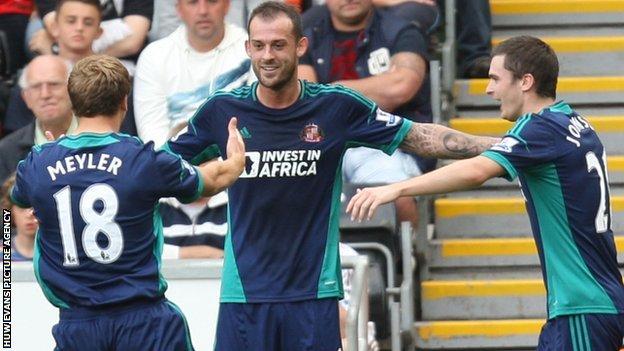 Steven Fletcher scored twice on his Sunderland debut to end Swansea's perfect start to the season.

The £14m new signing pounced on Ashley Williams's mistake before curling the ball expertly into the bottom corner.

Swansea responded almost immediately when Wayne Routledge fired home from 10 yards, but Fletcher tapped in at the far post just before half-time.

Michu's powerful header secured a point for the home side, who survived despite Chico's red card 20 minutes from time.

In fact, Swansea continued to look the most likely scorers in the closing stages, having forced Sunderland firmly on the back foot from the start of a dominant second half.

Crucial blocks and well-timed tackles in their own area by visiting defenders denied unchanged Swansea their third consecutive win of the season as Sunderland collected their second point from two games.

Having kept clean sheets in their two opening victories, Swansea's defending looked far from assured as they gifted Sunderland both goals.

Williams was the first offender, horribly miscuing his attempted back-pass, and giving Fletcher a clear run at goal as half-time approached.

As Michel Vorm left his line to close the angle, Fletcher opened up his body, curling the ball around the goalkeeper's outstretched hand just inside the far post.

Swansea's equaliser had all the hallmarks of their intricate passing game as Michu fed Nathan Dyer on the edge of the area. He flicked the ball into Routledge's path, who drove the ball home.

Following a lengthy delay as Swansea left-back Neil Taylor received treatment for a suspected broken ankle, there were six minutes of added time at the end of the first half.

And less than a minute remained when former Wolves striker Fletcher restored Sunderland's lead against the run of play.

Again it was a gift from the home defence as Vorm allowed Sebastian Larsson's cross to reach the far post, where Fletcher forced himself in front of a dithering Chico to tap in from two yards.

Swansea found greater urgency after the break and there was an air of inevitability about Michu's equaliser.

Having seen a powerful header bounce over the bar moments earlier, Michu rose to dispatch Jonathan de Guzman's cross into the bottom corner for his fourth goal of the season.

A third Swansea goal looked a distinct possibility, but Chico's moment of madness halted their momentum.

The defender was given a straight red after clipping Louis Saha's ear with his boot as the Sunderland substitute flicked the ball down the left touchline.

Martin O'Neill's men failed to capitalise, though, and were fortunate that Dyer and De Guzman failed to connect properly with shots in front of goal in an enthralling climax.

But they almost snatched a late winner when Saha's drive was well blocked by substitute Alan Tate after more calamitous defending.

"I know we've won two games 5-0 and 3-0, but this game has given me most as a manager because everything was against us from the beginning.

"A very serious injury for Neil [Taylor] after just 10 or 12 minutes, and the first mistake we make they score a goal.

"Then we come back to 1-1 and then passed injury time they score to make it 2-1. Then we came back in the second half and played great football to get the draw."

"But he can also do well for us outside the penalty area, he has a lovely touch, but it was very pleasing for him to get off the mark.

"With all the euphoria of Adam [Johnson] signing for us he was maybe in his shadow a bit, but he is a very good player."