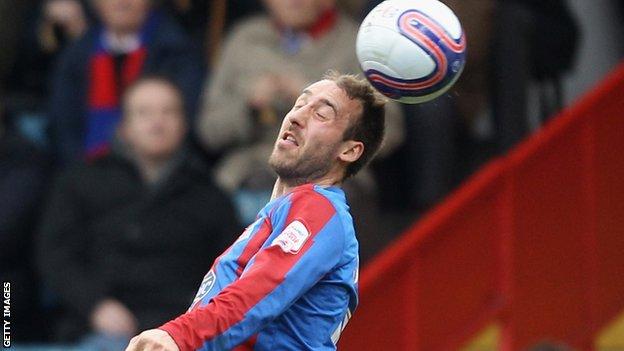 Glenn Murray scored twice as Crystal Palace picked up their first win of the season with a 2-1 victory against Sheffield Wednesday.

The Owls arrived at Selhurst Park unbeaten in their last 19 games but were behind after just 30 seconds when Murray steered the ball home.

Wednesday equalised five minutes into the second half when Michail Antonio struck after a corner was not cleared.

But Murray won it in the 83rd minute, converting Wilfried Zaha's cross.

Wednesday have been in good form on their return to the Championship, winning two and drawing one of their first three games.

Palace, in contrast, had failed to pick up a single point before facing Dave Jones's side.

However, it was the home side who started better and were ahead before a Wednesday player had even touched the ball.

Zaha's deep cross found Yannick Bolasie and his ball across goal found Murray, who fired beyond Chris Kirkland and into the net.

Wednesday had chances to hit back quickly through Antonio and Chris O'Grady, but it was not until the 50th minute before they finally managed to score.

Miguel Llera's corner was not dealt with by the Palace defence and Antonio was on hand to bundle home.

From then on, either side had chances to snatch three points but it was the hosts who grabbed that vital second goal as Murray prodded home Zaha's cross.