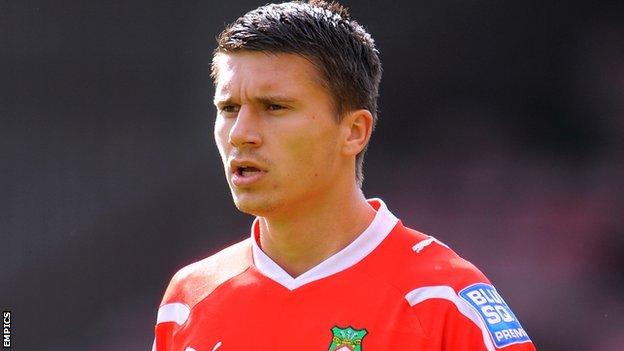 Cieslewicz beat Andy Sandell before sending the ball past Lenny Pidgely in the 24th minute.

Wright replaced Cieslewicz in the 76th minute and finished off the task at the Racecourse.

The visitors continued to press until the final whistle, but Justin Edinburgh's side were unable to profit from their efforts.

However, despite defeat, County remained top of the table while Wrexham climbed three places to seventh.

Wrexham player-manager Andy Morrell told BBC Radio Wales: "It was good. They're a good team… big, strong, got pace both flanks, but I thought we played well bar the first 10 minutes where I thought we were a bit nervy, really, a little bit edgy.

"They had a really good chance, which they put over the bar and I think from then, 15 minutes in, I thought we played well.

"It wasn't pretty at times, but we dug in and were professional about the performance and once we go 1-0 up we're not easy to peg back.

"I think we probably deserved it.

"They were soft goals to give away.

"But I thought there were two good footballing sides out there in a strongly-contested derby.

"But it's one that we'll probably look back and think that if we'd been a bit more clinical when chances came our way, then we'd probably have got something out of the game."