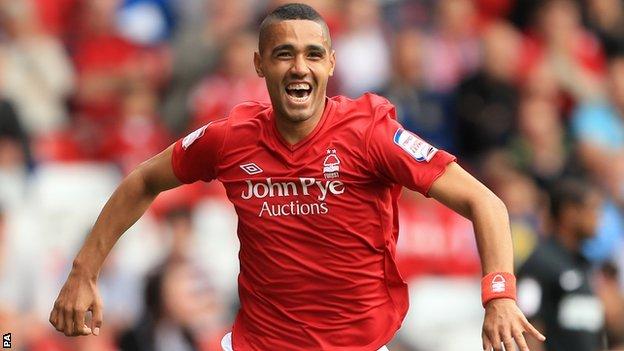 Nottingham Forest survived a late scare to beat Charlton and maintain their unbeaten start to the league season.

The Reds dominated before the interval and Adlene Guedioura fired a shot against the bar before Lewis McGugan's long-range free-kick made it 1-0.

Sam Hutchinson doubled the lead after half-time with a neat strike.

And although the Addicks replied with a Ricardo Fuller header that went in via the post and Forest keeper Lee Camp, the hosts go third in the Championship.

Forest were good value for their victory - which handed Charlton their first defeat since their return to the second tier of English football - and could have been out of sight by the break.

The hosts started brightly, and with McGugan controlling the midfield it looked only a matter of time before they went ahead.

Guedioura almost netted after eight minutes but his shot from inside the area hit the crossbar.

However, Forest did go in front when McGugan's free-kick from wide on the left somehow went through a crowded penalty box, eluded keeper Ben Hamer and found the back of the net.

Dexter Blackstock then missed a good headed chance from 12 yards and Simon Cox forced a decent save from Hamer just before half-time.

The Londoners improved after the break, but still rarely troubled Camp's goal.

Jordan Cook did force the Forest keeper into a save but the hosts deservedly doubled their lead when on-loan Chelsea defender Sam Hutchinson raced through from right-back and scored with a neat finish after good work by Blackstock.

Charlton threatened to ruin their debuts as they made it 2-1 with two minutes left when Camp turned in Fuller's close-range header.

But Forest held on to go third in the Championship table on the back of their best start to a league campaign in six seasons.