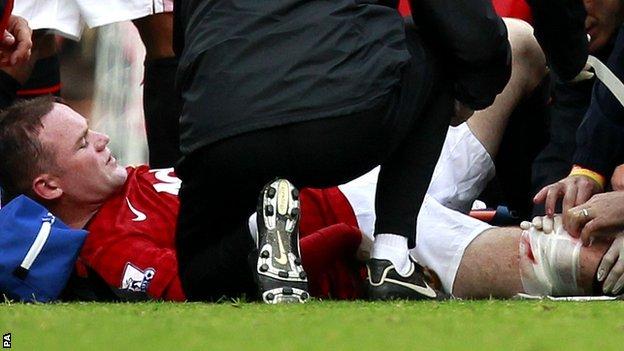 Wayne Rooney faces four weeks on the sidelines after suffering a gash on his right leg during Manchester United's 3-2 win over Fulham on Saturday.

He was injured when blocking a free-kick and Fulham's Hugo Rodallega landed on the England international's thigh.

Rooney, who spent the night in hospital before being released on Sunday, will miss two World Cup qualifiers.

"Wayne Rooney's been whisked off to hospital immediately and it looks a bad one," said manager Sir Alex Ferguson.

"I think he could be out for four weeks with a bad gash."

Rooney had started United's 3-2 win on the substitutes' bench but replaced Shinji Kagawa on 68 minutes, and lasted less than 25 minutes before being forced from the field.

Rooney will miss England's two World Cup qualifiers against Moldova and Ukraine on 7 and 11 September, as well as three league games including the away fixture at Liverpool on 23 September.

Without his 26-year-old forward, Ferguson will have to rely more heavily on recent acquisition Robin van Persie.

The Dutchman scored his first goal for his new club on his home debut in the hard-fought win, and his new manager was full of praise after the final whistle.

"It was a fantastic strike [from Van Persie], no hesitation. A magnificent hit that set the place alight," added Ferguson.

"This was his first game at Old Trafford and he'll come on from that."

Van Persie, 29, said his goal, which equalised Damien Duff's early opener for Fulham, was a perfect introduction to life at Old Trafford.

Thanks for all your get well messages for @WayneRooney! He's home from hospital now, leg stitched up, but feeling ok

"The ball came and I wasn't really thinking about what to do. I had only one thing on my mind and it went in the far corner, exactly what I wanted," he admitted.

"I liked it out there. It's a big stadium, a great stadium with great fans. They have been very nice to me today, and I do appreciate it.

"It's a massive club and I'm just happy to be here. It's a new challenge which I'm looking forward to and I'm glad we got three points."

For Fulham manager Martin Jol, whose sides have never beaten Manchester United in nine games of trying, the first-half performance from his team undermined the Cottagers' later attempts to get back into the game.

"We didn't play well in the first half and didn't deserve anything," he confessed.

"But we can play football, we are growing and we can be a good team. If we do the right things that we can do we are a good team, and I enjoyed the second half."