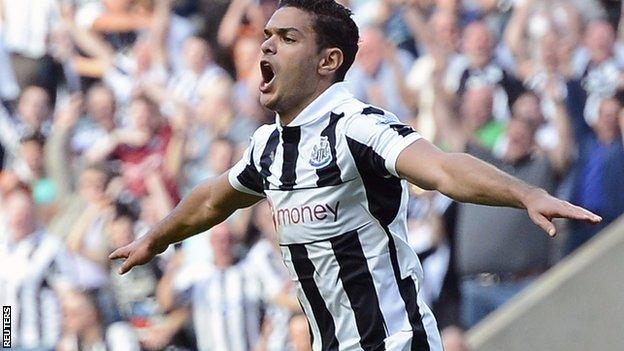 Hatem Ben Arfa's spectacular strike earned Newcastle a draw as they came from behind to deny Paul Lambert a first league win as Aston Villa boss.

Villa had lost Lambert's first two games in charge and, though there may be a tinge of disappointment at missing out on three points, he will be relieved his side are off the mark.

The visitors began strongly and took the lead through Ciaran Clark's header.

After such an impressive campaign last season, the challenge for Newcastle was always going to be whether they could sustain the type of form which saw them finish fifth and qualify for the Europa League.

Following their opening day win against Tottenham, they have now lost one and drawn one as manager Alan Pardew seeks a formula to cope with the challenges of combining the Premier League with European football.

Villa, meanwhile, might have been forgiven for beginning the game with a lack of confidence after two successive defeats at the start of the Premier League campaign.

But, putting aside their recent poor record on Tyneside - they had conceded 10 goals on their previous three visits - Villa probed patiently and deservedly went in front.

A spell of pressure culminated in Clark putting them ahead midway through the first half, the 22-year-old finding himself in an unusually advanced position to head home from Barry Bannan's precise left-wing cross.

The lead was merited, particularly since Darren Bent had gone close to opening the scoring moments earlier, only for his low drive to be thwarted by the legs of Tim Krul.

The goal was a reward for their approach under their new manager, and the Scot was at pains to tell his side to keep hold of the ball throughout, gesticulating angrily at every stray pass.

Aston Villa may consider a point a good result away against Newcastle, but it extended their winless run in the Premier League to 13 matches - a club record

But Newcastle are a force on their own turf, where they had won five of their previous six games, and possess the firepower to trouble any defence.

Their response was a positive one, with Papiss Cisse and Demba Ba always threatening through their lively movement.

The home supporters felt they should have had a penalty when Ba tumbled under a challenge from Eric Lichaj, but the defender would have felt hard done by had referee Lee Probert pointed to the spot.

Cisse and Ba had their chances - the former's shot was tipped around the post by Brad Guzan and he headed wide on the stroke of half-time - but it was another of last season's key players who finally made the breakthrough.

Ben Arfa collected the ball on the edge of the area just before the hour mark with seemingly little danger, but he cut on to his weaker right foot and drilled a stunning drive beyond the reach of Guzan.

Former Magpies midfielder Stephen Ireland might have snatched victory for Villa with 10 minutes remaining, but he smashed wildly off target when free inside the penalty area.

Then, five minutes into stoppage-time, Yohan Cabaye's 25-yard free-kick looked to be heading in but Guzan, picked ahead of Shay Given, saved acrobatically.

Aston Villa manager Paul Lambert: "I thought we were excellent throughout, offensively and defensively. Some of the football we played was very good. We've got a young side and every one of them was very good. We'd rather try to play football than not and we've got really good players in our team. If we keep working as hard as that we'll do well. We're getting stronger."