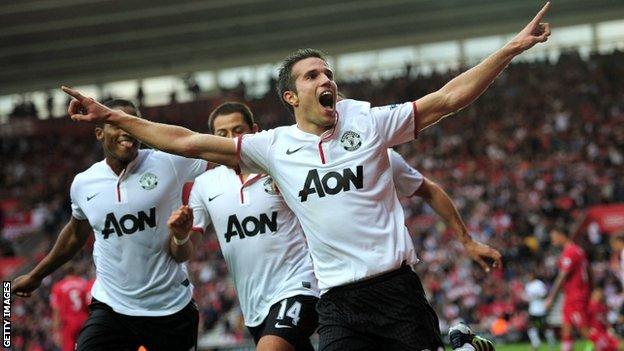 But the hosts got themselves back in front with a header from Morgan Schneiderlin before Van Persie's dinked penalty was well saved by Kelvin Davis.

United poured forward and the Netherlands striker looked to have rescued a point when he stabbed home a rebound.

But the former Arsenal captain was not satisfied and wrapped up all three points with a superb near-post header to ensure Sir Alex Ferguson was victorious in his 1,000th league match in charge of United.

For Saints it was a desperately disappointing end to what had been a cracking game in which they fully played their part.

After an encouraging start against Manchester City and a poor defeat by Wigan they are still without a point following their promotion back to the Premier League.

But if this performance is anything to go by, Nigel Adkins' side will not have to wait too much longer for a first league victory.

"Manchester United fans were left celebrating as if they had won the league. When Lambert went off in particular, the Manchester United centre backs found life more comfortable. Suddenly there was more space it seemed, with Scholes able to pick out his passes. But, what an extraordinary last half hour to the game for Robin van Persie."

In Adam Lallana and James Ward-Prowse they have two of the brightest young talents in the Premier League.

The Saints, who have conceded eight goals in their three league games, will have to sharpen up at the back, though.

At the other end of the table, if Van Persie - who now has 100 Premier League goals - can continue his form for the majority of this season, Ferguson has every chance of securing United their 20th top-flight title.

The Dutchman was a menace throughout and showed his class with three expertly taken goals.

The occasion seemed to get the better of the hosts in the opening exchanges and in the sixth minute Van Persie fired a volley just wide.

But after a bright start from United, it was the Saints who took the lead when Lambert outjumped Rafael at the back post to head home his second of the season.

United were soon on level terms though, when £24m signing Van Persie fired home a half volley at the back post after a fine cross from Antonio Valencia.

Shinji Kagawa went close for United either side of half-time while Van Persie side-footed wide when unmarked in the area.

Saints were looking lively on the break and it came as no real surprise when Schneiderlin headed them back in front from Lambert's cross, taking advantage of Patrice Evra's slip to beat Anders Lindegaard from close range.

United introduced Paul Scholes and the veteran midfielder immediately created a chance for Van Persie, who fired straight at Davis from a tight angle.

Ferguson's men should have been level moments later after Jos Hooiveld scythed down Van Persie in the box.

But the forward could only watch in horror as the Saints keeper flung himself to his right and, at full stretch, managed to palm the chipped penalty around the post.

Van Persie, though, was not to be denied and his late brace was enough to give Ferguson victory in his landmark match.

Southampton manager Nigel Adkins: "For a newly-promoted club we have scored two goals in open play against a Manchester United side packed full of experience. [Rickie] Lambert had an exceptional game, Jason Puncheon had a superb game, as did Adam Lallana.

"I thought they had worked very hard and we made the substitutions to bring more energy into the side. [But] you get punished at the highest level."