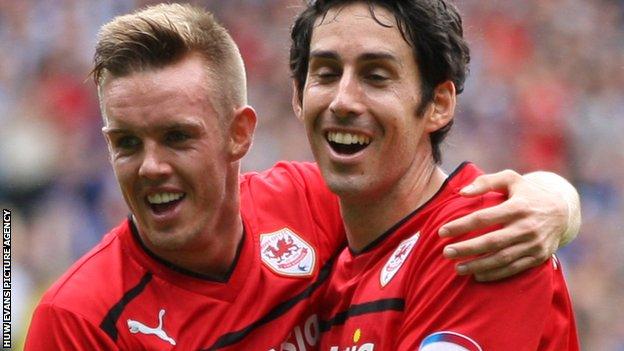 Peter Whittingham's hat-trick helped Cardiff City come back from a goal down to defeat Wolves.

Bakary Sako marked his Championship debut with a cracking low free-kick to put the visitors ahead.

Cardiff responded a minute later when Whittingham converted a penalty won by debutant Craig Noone.

Three minutes later, Whittingham finished a swift counter attack from the edge of the Wolves area, before his second-half free-kick sealed things.

The midfielder's third - his second career hat-trick for Cardiff - was the pick of the goals, as he found the top corner by lifting the ball over the wall.

New singing Noone, who joined from Brighton and Hove Albion on Thursday, was a constant menace with his pace and trickery.

Such was his impact on the left wing, Cardiff hardly felt the absence of Craig Bellamy through injury.

But it was another new face to strike first in a pulsating opening as Sako drilled a low free-kick past goalkeeper David Marshall on 10 minutes.

Noone's first telling contribution followed almost immediately when he tempted Ronald Zubar into a rash challenge inside his own area, with Whittingham dispatching the penalty down the middle.

Cardiff then turned defence into attack to take the lead.

Another Cardiff debutant, Nicky Maynard, was involved before Whittingham fired low into the bottom corner from 18 yards.

Wolves, who have recorded just two wins in their last 28 league games, enjoyed some midfield dominance after the break.

But they failed to engineer clear openings and Whittingham's glorious third after another foul on Noone sealed the points.

"We've signed 10 players - a bit like last season - and it takes time to integrate people. We realise that, but looking at them today they are beginning to get there.

"I was so happy with them; the way they applied themselves - they are beginning to slip into the work-rate I expect at this football club.

"But we're bringing in good footballers as well so it's upping the levels and I'm delighted with the performance."

"We talked long and hard about not conceding stupid free-kicks or penalties and we made stupid errors at important times in the game.

"We were 1-0 up and we didn't give ourselves the chance to hold onto our lead. I'm very disappointed at our stupid mistakes which cost us goals.

"Everyone can beat everyone in this division but we've lost quality players in the transfer window. Our new players will take time to bed into the side."