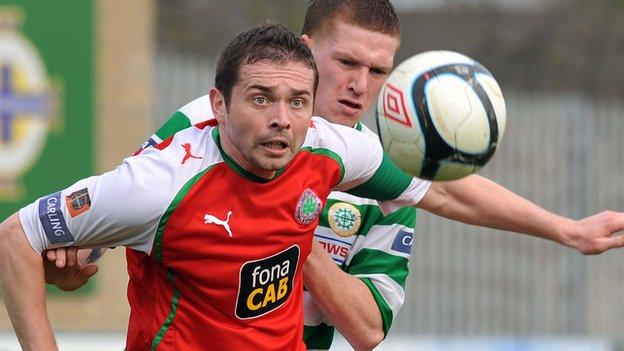 Cliftonville striker Chris Scannell will be out for at least six months after suffering an Achilles tendon tear in Saturday's draw with Glentoran.

There are fears that the injury may bring a premature end to the career of the veteran forward.

Scannell has been told that he needs to undergo the operation quickly for him to have a chance of playing again.

This is because if the injury begins to heal itself it will complicate the prospects of a full recovery.

Cliftonville officials are attempting to help Scannell organise a operation in the early part of this week.

"He is 35 next month so time is not on his side, he's set up a dental practice and six months is the minimum time out," said Reds boss Tommy Breslin.

"It's down to Chris but it's not the way he deserves to leave the game."

Scannell sustained the injury as he fell during a Reds attack after coming on as a 72nd minute substitute in the 1-1 draw at Solitude.

Breslin now has to plan ahead without a player who has netted 153 goals in 447 games for the north Belfast side.

"His leg is in plaster and he will have have an operation in the next week," added Breslin.

"It places extra responsibility on the other three strikers Joe Gromley, Liam Boyce and Diarmuid O'Carroll - his experience will be missed.

"I will sit down with the chairman during the week to discuss a possible replacement but we are at full budget and we have other players who can help out in attack."