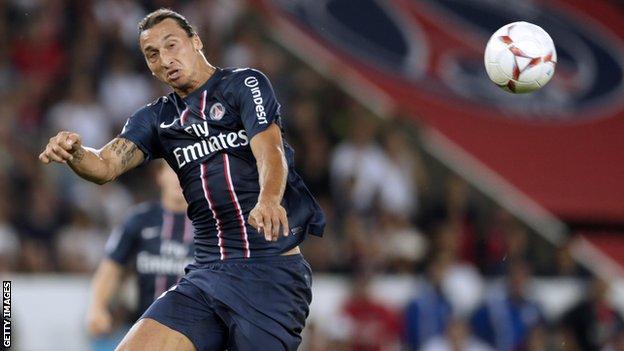 The transfer window closes in England at 23:00 BST on Friday and another frenetic day of last-ditch deals is in store.

That situation is likely to be repeated in several other major European leagues, but transfer deadline day does vary from country to country, as our European football writers explain below.

They will also be contributing to our transfer deadline day live text commentary, which will start at 09:00 BST on Friday and keep you bang up to date with everything that is happening both at home and abroad.

The transfer window in France closes on Tuesday 4 September.

PSG coach Carlo Ancelotti still hopes to sign a right-back before the window closes in France on 4 September.

Champions Montpellier have also been active, although their modest £10m outlay was offset by Olivier Giroud's sale to Arsenal.

Likewise, Lille have used the money recouped on Eden Hazard (sold to Chelsea) to fund the captures of France midfielder Marvin Martin and Salomon Kalou.

French teams rely on player sales to bolster finances, yet with many European clubs feeling the pinch the likes of Lyon and Marseille have struggled to find takers. With time running out, cut-price deals are being pushed through.

Lyon have relinquished Kim Kallstrom to Spartak Moscow and Aly Cissokho to Valencia, while Cris, Michel Bastos and Hugo Lloris could also be sacrificed.

One in, one out

Marseille, meanwhile, have sold Alou Diarra (to West Ham) and Cesar Azpilicueta (to Chelsea) - and Stephane Mbia may follow.

With money in the bank at last these clubs are lining up a flurry of last-minute recruits, although Lyon coach Remi Garde is unhappy to be conducting his business so late.

"Having the transfer window open four games into the season is far from ideal," Garde said. "The issue needs to be addressed."

Window closes for players moving between Bundesliga clubs at 17:00 BST on Friday.

As you would perhaps expect from Germany's top flight, the transfer window is organised in a transparent, terribly efficient way, to the point that it effectively closes a good 12 hours before the rest of Europe.

If you're not on the final version this Friday, you can't be signed by a Bundesliga club this summer and by 18:00 local time the deal must be fully concluded.

That explains why last January's only last-minute, hectic transfer, was striker Mohamed Zidan's move from Borussia Dortmund to Mainz. That was concluded at 17:45 local time, in time for Mainz sporting director Christian Seidl to make it back home for supper.

This year's closest shave will probably involve Rafael van der Vaart's return to Hamburg, but that deal too needs be done by tea time.

However, Bundesliga players do not have to be listed if they are about to leave to another league, so some modicum of excitement will remain on Friday. Players can also leave Germany beyond the end of August if they are moving to leagues with different windows, like Russia, for example.

In addition, players without a club don't have to be listed. Michael Ballack, anyone?

Window closes for players moving between Italian clubs at 18:00 BST on Friday.

If there's a place in the world that has played host to more last-minute buying and selling in football than anywhere else, it's probably the ATA Hotel in Milan.

Twice a year, the final days of the transfer window in Italy are held here.

It's chaotic. Clubs gather to thrash out deals, players and agents arrive from the Porta Garibaldi train station next door or Linate airport, 15 minutes away. There's a frantic rush to get all the paperwork done before 19:00 local time when the market closes for deals between Italian clubs.

After that the only business they can do is sell players to clubs in countries where the deadline has yet to pass.

The same day, Fiorentina and Juventus both thought they had signed Manchester United striker Dimitar Berbatov only for the deals to fall through in acrimonious circumstances. They might now turn their attention to Arsenal's Nicklas Bendtner or Marco Borriello of Roma instead.

Most intriguing of all is the future of free agent and Italian legend Alessandro Del Piero following his release by Juventus. His representatives held talks with Swiss club Sion on Wednesday but the chances of him joining compatriot Gennaro Gattuso there appear slim.

Deadline day in Spain is nowhere near the event it is in England. This is at least partly determined by the fact that the majority of La Liga's clubs are not in good financial shape.

La Liga has lagged behind the Premier League and even Italy's Serie A in terms of aggregate spend for several windows now. Malaga bucked the trend following the Qatar royal takeover in summer 2010, spending heavily, but the well has run dry. The Andalucians are the only club in the top flight not to have signed a player in this window.

Barcelona and Real Madrid both run big - but serviceable - overdrafts, and neither is in need of significant recruitment. Both have completed their business save any late surprises, having signed their major targets (Alex Song and Jordi Alba for Barcelona, Luka Modric for Real).

With clubs keen on reinforcement forced to rely heavily on loans, such as promoted Deportivo La Coruna, any late moves are likely to be out, rather than in. Even after Malaga's sale of Santi Cazorla to Arsenal, speculation continues to surround Isco and Jeremy Toulalan.

Meanwhile, Athletic Bilbao could lose star pair Fernando Llorente and Javi Martinez. Llorente has given notice that he will not extend his contract, and only tax issues are holding up Martinez's potential switch to Bayern Munich.

Spain's neighbour is more likely to see a bit of late action before the deadline. Benfica have now joined their arch-rivals Porto in being recognised around Europe as master traders.

Yet both clubs have unloaded their share of dead wood, and are not under too much pressure to sell cheaply. This is particularly the case for Porto, having already earned well from the double sale of Alvaro Pereira and Fredy Guarin to Inter Milan.

So Porto can drive a hard bargain with Tottenham for midfielder Joao Moutinho, and Benfica are in no rush to ship Axel Witsel (linked with United and Real Madrid) or Oscar Cardozo, who is being tracked by Juventus.

The third of the big three, Sporting Lisbon, have given generous contracts to free transfer signings including ex-Chelsea defender Khalid Boulahrouz and Zakaria Labyad, although they are still in the market for cover at centre-forward.

Their biggest star, Portugal goalkeeper Rui Patricio, killed speculation linking him with a move to one of Europe's biggest clubs by signing a contract extension tying him to the club until 2018.