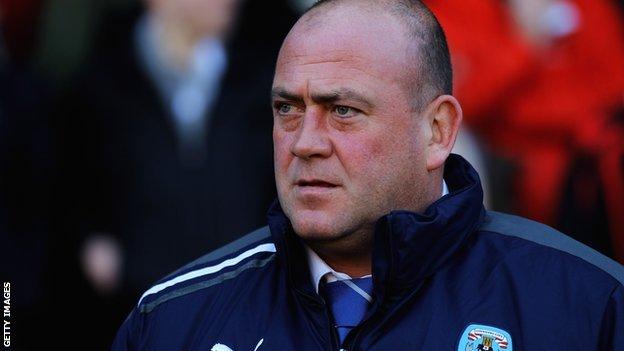 Coventry City have sacked manager Andy Thorn after 16 months in permanent charge at the Ricoh Arena.

"We felt it was right to give Andy the chance to put that right but do not feel that has happened."

The Sky Blues started this season brightly with a 1-0 win over Dagenham & Redbridge in the Capital One Cup.

"It's so soon in the season you don't know what's going on behind the scenes.

"Andy was at the helm when they got relegated last season. You think if they were going to make a decision they would have done it in off season but obviously something has gone on.

"I had a great time at the club, we brought some decent players then but they've since become a selling club."

But Thorn's side could only draw against Yeovil, Sheffield United and Bury.

On Saturday, the Sky Blues led at the break at home against the Shakers but let their two-goal advantage slip in the second half and were booed off at the final whistle.

"Of course the fact that we have surrendered the lead in the first three league games has not helped," added Fisher.

"But there are several other factors in this decision - not just three disappointing results.

"We would like to put on record our thanks to Andy for his work in current and previous roles at the club."

Coventry finished second from bottom in the Championship last season and went down along with Portsmouth and Doncaster Rovers.

They are now in the third tier of English football for the first time since 1964.

Thorn, who was a member of Wimbledon's 1988 FA Cup-winning side as a player, took over as caretaker boss in March 2011 and won three, drew three and lost two in temporary charge before being handed the job on a permanent basis.

But since then he has only won nine out of 51 league games.