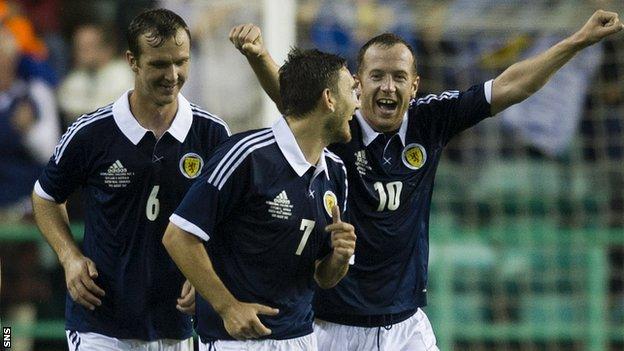 Callum Davidson believes Scotland can make the positive start he feels is vital to their chances of achieving World Cup qualification.

He's got choices and difficult choices to make

"It's a pretty hard group," said 19-times capped Davidson. "It's vital they get off to a good start. Not getting beat is the most important bit.

"Scotland have always been pretty good at home, it's our strength.

"It's always your big players [that come to the fore], the ones that have been there before, the experienced ones like Kenny Miller and Gary Caldwell.

"Charlie Adam will be an important player for us. Steven Naismith is back fit again, which is a bonus. These are the guys that will probably come to the fore and help out everybody else."

Versatile Chelsea defender Branislav Ivanovic and Manchester City left-back Aleksandar Kolarov are likely to feature in the Serbia team while Napoli's Goran Pandev will be one of Macedonia's main attacking threats.

"When these type of teams come over to our country, they're very, very tactically aware," said Davidson, whose last cap came against Macedonia in 2009.

"The game's probably more tactical than the Scottish game or the English game.

"You'll find out in the first 20 minutes what their intentions are for the game. If they [Serbia] set up defensively, it's going to be very hard for us to break down and they'll probably try and play on the counter attack.

"But, if they try and open up, it might be a little bit easier for the likes of Kenny to go through.

"Obviously Pandev is the name we all know, so he'll probably be one of the key players [for Macedonia] but there'll be two or three that Craig Levein will target, the ones that we'll have to stop."

Among the choices coach Levein faces is the position that St Johnstone's Davidson himself plays: left-back.

Southampton's Danny Fox started in that berth against Australia after Lee Wallace, playing in the Scottish Third Division with Rangers, was left out of the squad.

Charlie Mulgrew, who won player of the year awards last season as part of Celtic's Scottish Premier League-winning side, and Sunderland's Phil Bardsley have also occupied the left-back slot for Scotland in recent games.

"The only good thing about it is that they're all good players," said Davidson of Levein's dilemma.

"When I was playing, me and Gary [Naysmith] were the only two so it's nice for him to have a choice.

"I thought Danny Fox did excellently in the last game. Obviously there's Charlie Mulgrew, player of the year. He mainly plays at centre-half, I think he's been brilliant at centre-half. I don't know why he can't get a look-in at centre-half either.

"He's got choices and difficult choices to make and the ones who'll be left out will be annoyed but that's what it is to play for your country."

Another defensive issue for Scotland could be integrating a new goalkeeper with Matt Gilks ready to deputise if Allan McGregor does not overcome a knock picked up in the 3-1 win over Australia, though .

Naismith's timely return to fitness gives Levein the option to deploy the Everton player in a variety of attacking positions behind Miller.

But fans making the journey to Hampden will hope to see Jordan Rhodes feature after broke his international duck against the Socceroos at Easter Road.

Scotland have not won the opening match of a qualifying campaign since 2006 and, with Belgium, Croatia and Wales also in Group A, at least one win from the first two matches will be needed to ensure Levein's side stay in touch before the section resumes in October.

So, how many points will Scotland possess after their opening double-header?

"Four," according to Davidson.