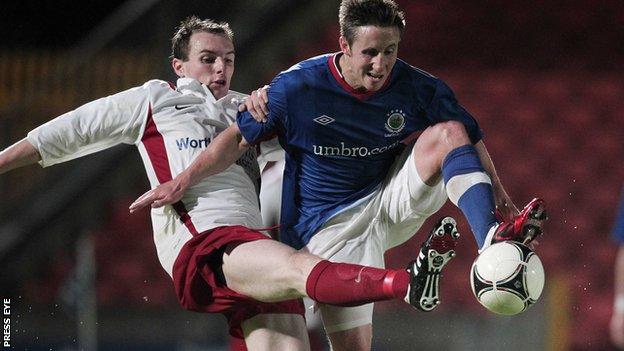 Premiership sides Linfield, Glentoran, Portadown and Glenavon all saw off Championship opposition in the second round of the League Cup.

However, Dungannon Swifts were beaten at home by Coagh United who went through 7-6 on penalties.

Linfield saw off Ards 3-1 at Windsor Park while Glentoran won by the same scoreline against PSNI.

Glenavon had a comfortable 6-1 win over Sport and Leisure while Portadown had a 3-1 win over Dundela at Shamrock Park.

In the upset at Stangmore Park, Steven Park gave Coagh United the lead in the first half but home striker Stephen O'Neill shot in a late equaliser.

Swifts keeper Niall Morgan, having saved two spot-kicks in the shoot-out, had a penalty to win it but saw his effort saved by opposite number Johnny York.

Coagh, from Championship One, went through when former Carrick player Grant Hutchinson's spot-kick crashed off the crossbar.

Linfield looked on course for an expected win when striker Peter Thompson fired them into the lead after just two minutes against Ards.

The Championship One leaders equalised before half-time through Paul McDowell's 25-yard free-kick.

However, goals from Brian McCaul and Jim Ervin saw the Blues go through 3-1.

Glentoran were 2-0 up at half-time against PSNI, thanks to an early Richard Gibson strike and Mark Clarke's header.

Former Glens midfielder Lukasz Adamczyk pulled one back for PSNI with a fine chip but Jimmy Callacher restored the Premiership side's two-goal advantage with a curling free-kick.

Portadown eased into the third round with a comfortable home win over Championship One side Dundela.

Joe McNeill pounced on a rebound after Duns keeper Paul Hughes had saved Sean Mackle's shot on the half hour, and Mackle himself made it 2-0 five minutes later.

Darren Murray got Portadown's third after the break.

Andy McGrory scrambled in Glenavon's 10th-minute opener and Guy Bates scored his first goal for the Lurgan club to give them a 2-0 half-time lead at home to Sport and Leisure Swifts.

Mark Haughey made it three early in the second half before Darren Gallagher got one back for Sport and Leisure.

A David McErlean own goal made it 4-1 and Glenavon wrapped up the victory with further scores from Matty Burrows and Gary Hamilton.

Carrick Rangers continued their solid start to the season with a 5-0 win away to Killymoon Rangers, with Aaron Harmon, Daniel Kelly (2), Adam Dick and Kyle Owens on target.

Lisburn Distillery's Gary Liggett gave the Premiership side the lead just before half-time away to Limavady United.

But the Roesiders levelled through a 77th-minute Damien McNulty penalty after Aaron Traynor's pull back on Billy Doran.

Distillery won it in extra-time thanks to a Liggett header and a late strike by Jordan Hughes.

Corey Hegarty snatched a 90th-minute winner for Institute in their home tie against Banbridge Town.