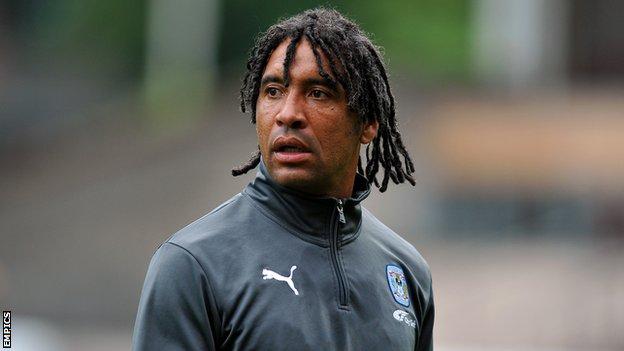 Coventry City caretaker manager Richard Shaw has revealed that he wants the post on a full-time basis.

Shaw, who took temporary charge on Tuesday alongside Lee Carsley after Andy Thorn's departure, guided his side to League Cup victory over Birmingham.

Asked if he wanted the job, Shaw told BBC Coventry & Warwickshire: "I'd be a fool to say no because everybody would know I'd be lying, of course I would.

"I've enjoyed it. I feel like I can give something to this football club."

During his playing career Shaw made 317 league appearances for Coventry in an 11-year spell with the club.

In 2006 he left to join Millwall, where he subsequently became caretaker manager for five games following the sacking of Willie Donachie, before taking up a coaching role with the London club following his playing retirement in 2008.

Richard Shaw made 338 starting appearances for Coventry City - and scored one goal.

Shaw moved to the Ricoh Arena as Thorn's assistant earlier this summer.

He was then asked to step in when Thorn was sacked after the Sky Blues failed to win any of their opening three League One fixtures, all of which ended in draws.

Despite having no previous experience of a permanent managerial position, Shaw, 43, feels that he is capable of taking over the reins at the Ricoh.

"It's strange when people say someone's got experience and this and that," he said. "I don't buy into that.

"I think if you're enthusiastic and you know the game, then why not?

"It hasn't got to be someone old, who has managed in this division, in my opinion. But it's out of my hands."