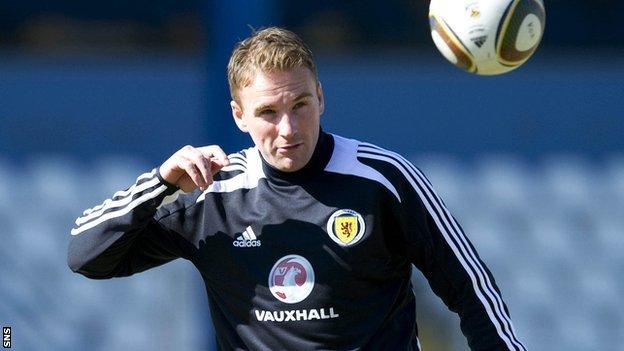 Ryan Stevenson has completed his return to Hearts from Ipswich Town after signing a three-year contract.

The 28-year-old moved to Portman Road in January, having spent two years with the Edinburgh club.

But he only made 11 appearances for the Championship outfit, scoring once for the Tractor Boys.

Motherwell had been keen on the player, who had began his career with St Johnstone before heading for Ayr United then Tynecastle.

However, Motherwell manager Stuart McCall played down his chances of beating his Scottish Premier League rivals to Stevenson's signature.

Stevenson had quit Tynecastle following a dispute over unpaid wages but told Hearts' website: "I'm excited at the prospect of returning to the club.

"Naturally, the circumstances of my previous departure might have made this move seem unlikely, but I want to assure everyone that I am only focused on playing and winning with Hearts.

"I am delighted to be here."

Stevenson was called up to the Scotland squad for last year's friendly against Cyprus but has yet to win his first cap.

He arrived at Tynecastle as speculation linked winger David Templeton and the versatile Ryan McGowan with Rangers.

However, Hearts manager John McGlynn gave no hint of likely departures as he expressed his delight at the midfielder's return.

"He is a quality player and can be used in a number of roles," he said of a player who scored 11 goals in 74 competitive matches for Hearts.

"He's physically strong and will be an asset to this Hearts team.

"When I heard he wanted to return, it was a simple decision for me to make.

"He gives us more options and that is to be welcomed."

Ipswich have, meanwhile, brought in two strikers - Paul Taylor from Peterborough for an undisclosed fee and Celtic striker Daryl Murphy on a season-long loan.