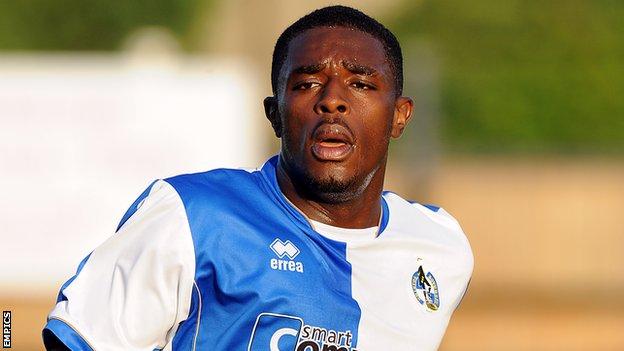 Middlesbrough striker Mustapha Carayol said he was delighted to score his first goal for the Teessiders since joining from Bristol Rovers in July.

Carayol scored in Boro's 2-0 win over Gillingham in the Capita One Cup.

He told BBC Radio Tees: "I'm happy to get my first goal - I've been struggling with my hamstring and only started training last Friday.

"I've only had three sessions, but it was nice to get them under my belt and I'll be ready whenever called upon."

Manager Tony Mowbray believes Carayol can be a major influence as Boro attempt to mount a promotion challenge.

"Muzzy is the type of player who will excite our fans. He excites me.

"Like all players of Muzzy's type, there will be days when it doesn't quite come off for him. Hopefully, he's going to stay fit and be a big player for us this year.

"He hasn't really trained for two weeks, which is why didn't put him on the bench at the weekend. This weekend at Millwall he'll be raring to go."