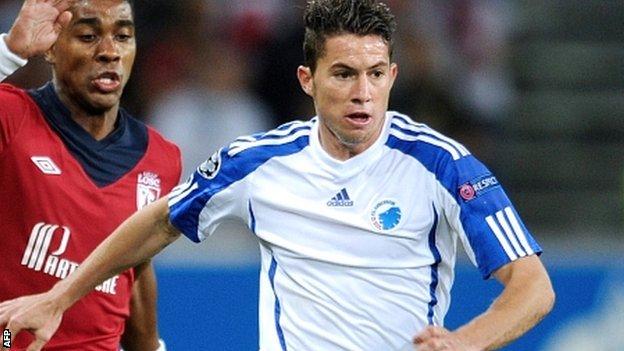 Everton have signed Bryan Oviedo from FC Copenhagen on a four-year deal for an undisclosed fee.

The 22-year-old Costa Rica international, who can play at left-back or in midfield, is expected to cost David Moyes's team £5m.

Oviedo has 13 senior caps and has been a regular starter for Copenhagen, where he has won two Danish League titles.

Everton, who have opened the Premier League season with two wins, have already added Steven Pienaar, who is now in his second permanent spell at the club, Steven Naismith and Kevin Mirallas to their squad.

Blues assistant manager Steve Round says Oviedo, who also has Champions League experience, has been on the Everton radar for some time.

He said: "He can play left-back, left midfield and left wing, all the way down the left, which will help us and give us good cover in the squad.

"I have seen him on a regular basis. I have been abroad and watched him, as have all the scouts and the manager."

Oviedo told Everton's website: "The last two or three days have been very stressful and tiring but I am so happy now.

"I am feeling good and right now everything is positive.

"I know a lot about Everton. I watch Everton games and Premier League games on the TV and it is a very good league."