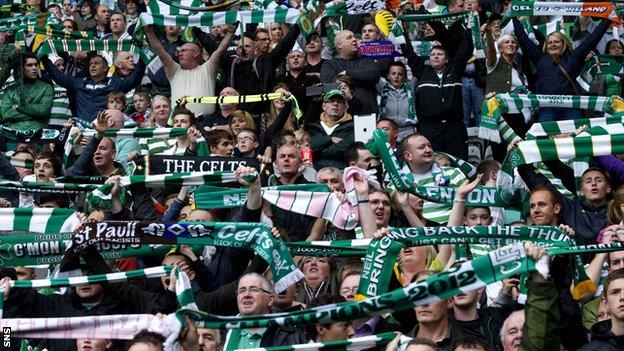 Not so long ago, Celtic Park was an arena even Europe's top clubs would prefer to give a wide berth.

The Hoops would save their best for the biggest occasions in front of a raucous home support, and many of the heavyweights of the Champions League would leave battered, bruised, and beaten.

But, after a four-year absence, Celtic are once again dining at European football's top table,

Neil Lennon's men will be looking to recapture the home form that made Celtic Park a fortress under Martin O'Neill, and then Gordon Strachan.

Here, BBC Scotland look back at some of Celtic's most famous Champions League nights.

Celtic's debut season in the Champions League group stage was the beginning of a pattern that the Parkhead side have only recently shed - powerful at home, powderpuff on the road.

In fairness, Martin O'Neill's side roared back from two goals down in the Stadio Delle Alpi to level against Juventus, only to be undone by a controversial penalty.

But comprehensive away defeats to Porto and Rosenborg meant Celtic had to defeat the Italian side to stand any chance of progressing from Group E.

Even the great Italian was outshone on this occasion though, with veteran Lubo Moravcik stamping his class on the game. He crossed for defender Joos Valgaeren to head the equaliser, before whipping in a corner for Chris Sutton to crash home a header that put Celtic 2-1 up.

Henrik Larsson restored Celtic's lead from the penalty spot after Sutton had been fouled, and the Englishman put clear daylight between the sides, smashing a wonderful left-foot volley past Fabian Carini.

Trezeguet netted again late in the match but Celtic held on for the win they needed. It was, however, to be in vain as Porto's victory against Rosenborg edged O'Neill's men into third place and a parachute into the Uefa Cup.

O'Neill's side had established themselves as a team who could mix it with Europe's finest with a thrilling run to the 2003 Uefa Cup final. The challenge was to carry that form into the Champions League.

Individual errors had cost Celtic dearly as they went down 2-1 away to Bayern Munich in their opening match, despite matching the Germans for long spells of the game. Therefore, a win against French side Lyon was imperative to get Celtic's Group A challenge back on track.

That was easier said than done against a team who boasted an array of stars, most notably Brazilian dead-ball master Juninho.

It was Celtic who were handed the perfect chance to score from a set-piece within five minutes. Larsson was tripped in the area, but Alan Thompson's weak penalty was easily saved by Grégory Coupet.

The Hoops weren't to be denied though as Liam Miller came off the bench to give Celtic the lead.

Sutton continued to thrive amongst the elite, heading Celtic's second to put them right back into contention in Group A. Star of the show though was Larsson, who laid on both goals in a wonderful individual display.

Celtic's fate would be decided in the final group game against Lyon in France. Needing a point to progress, the score was 2-2 before Bobo Balde conceded a late penalty, which Juninho dispatched to consign Celtic to third place.

The Parkhead side again dropped into the Uefa Cup, where they would reach thequarter-final stage becore succumbing to Spanish side Villarreal.

Gordon Strachan's side had lost by the odd goal in five at Old Trafford, but they now had the chance to do something no Celtic side had done before - qualify from the group stage.

It was a nervous evening for the Parkhead crowd as their side battled to match a United team featuring Cristiano Ronaldo and Wayne Rooney.

With 10 minutes remaining, Shunsuke Nakamura curled a wonderful free-kick beyond the dive of Edwin van der Sar and into the top corner.

The ecstacy of the home support was pierced by a last-minute penalty award for United. Perhaps Louis Saha was the last man who should have volunteered to take the kick, given his feeble attempts on goal prior to the award.

His spot-kick was not the worst, but Artur Boruc dived low to his right to make the save and send his side into the last 16 for the first time.

Celtic would go on to run AC Milan close in the first knockout round before going down to an extra-time Kaka goal in the second leg at the San Siro.

Celtic and Milan were drawn together for the third time in four seasons in the Champions League. Strachan's side had begun their Group D challenge in familiar fashion, losing 2-0 to Shaktar Donetsk in Ukraine.

After an uneventful hour at a rain-soaked Celtic Park, Stephen McManus bundled the ball over the line from close range to put Celtic ahead.

Lee Naylor looked to have cost Celtic the victory, inexplicably fouling Massimo Ambrosini in the penalty area with little danger afoot. Kaka once again drove a dagger through the hearts of Celtic fans, tucking away the spot-kick.

Celtic put Milan under enormous pressure in search of a winner.

In the 90th minute, Gary Caldwell curled a shot which Milan keeper Dida could only parry. Scott McDonald reacted when all around him froze and turned home the rebound, sending the Parkhead faithful wild with delight.

True to form, Celtic won all three matches at home in Group D, and lost all three away fixtures. Nine points was enough to take them through to the knockout stage, where they lost out to Barcelona.