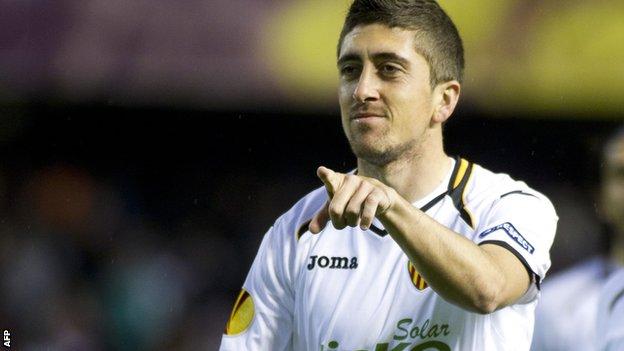 Michael Laudrup believes Swansea City have pulled off a major coup with the signing of Pablo Hernandez from Valencia.

Swansea paid £5.55m to the Spanish side for the 27-year-old winger, who signed a three-year deal on Friday.

Hernandez played under Swansea manager Laudrup at Getafe during the 2007-8 season.

"I am getting a player who only wanted to come here and play for us and that's great," Laudrup said.

"He specifically wanted to come here.

"The other players who have come here have come from smaller clubs.

"Here is a player from the third biggest club in Spain and he wants to come here. It is great for us."

The Spaniard agreed personal terms and underwent a medical in south Wales prior to Friday night's transfer deadline.

Hernandez has scored 16 goals in over 100 appearances for Valencia and has been capped four times by Spain.

The winger had been left out of Valencia's squad for their opening two games of the season and has previously spoken of his desire to be reunited with Laudrup.

"I managed Pablo in Getafe, he did fantastic for us," Laudrup added.

"He did so well and went back to Valencia, who are the equivalent in Spain of Arsenal over here.

"I think he has played 27 Champions League games in the last three seasons and made his debut in the national team.

"I am looking forward to having him here. He is a good player with the right mentality.

"Even if he comes from a big club he has that personality and mentality that he wants to go on."

While Hernandez has arrived at the Liberty Stadium, Swansea have seen Scott Sinclair depart.

The Swans accepted an offer of £6.2m plus add-ons from Manchester City for the 23-year-old.

Laudrup said Swansea had little option but to allow Sinclair to leave once the Premier League champions registered an interest in the Team GB player.

Sinclair had a year left on his contract with the Swans and had refused to sign a new deal.

"He didn't want to renew his contract and after the bid from Man City, I think that's what he wanted," Laudrup said.

"Scott is going to a huge club with a lot of great players. He has a lot of quality but he will have to fight for his place in the first 11.

"But I wish him the best and I think it was best for him to move as he had made up his mind.

"If you have a player like that it is better to let him go if the figures are OK for the club."