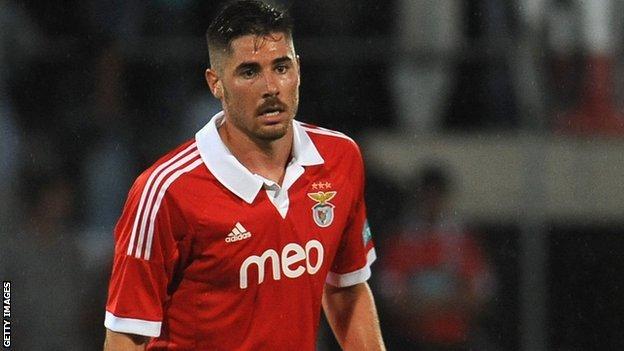 The former Real Madrid man won his only Spain cap earlier this year.

Tottenham, as ever, were busy. The arrival of Lyon goalkeeper Hugo Lloris was no surprise but the signing of Fulham's Clint Dempsey certainly was.

Liverpool's failure to complete a deal after their offer was rejected by Fulham completed a fruitless deadline day which will undoubtedly disappoint manager Brendan Rodgers after he cleared Andy Carroll off the wage bill to West Ham and brought in £4m from the sale of Charlie Adam to Stoke City.

City have also signed Fiorentina defender Matija Nastasic, 19, in a deal worth £13m plus Stefan Savic moving in the opposite direction.

Garcia left Real Madrid for Osasuna in 2007, only for the Bernabeu club to exercise a buy-back clause a year later before he moved on to Benfica in 2009.

Nastasic, 19, has two caps for Serbia and made 22 starts for Fiorentina in Serie A last season after joining from Partizan Belgrade a year ago.

The new arrivals at the Etihad will join 31-year-old Brazilian defender Maicon, who has moved in a £3m deal from Inter Milan, while moves for Scott Sinclair and goalkeeper Richard Wright have also been confirmed as Mancini completes his transfer business.

City have already signed Everton's Jack Rodwell for £12m but decided against pursuing deals for Robin van Persie, who went to Manchester United for £24m, and Eden Hazard, bought by Chelsea for £32m.

Javi Martinez was another player of great interest to Mancini but he has moved to Bayern Munich from Athletic Bilbao in a £30m-plus transfer.

Santa Cruz has joined Spanish side Malaga while Boyata has moved to Dutch outfit FC Twente.

Boyata, 21, spent last season on loan at Bolton and now joins up with former England manager Steve McClaren at the Dutch side.

The 22-year-old left-sided defender, who has 16 full caps, has made one appearance for City, as a substitute in a 5-0 league win over Sunderland in April 2011.