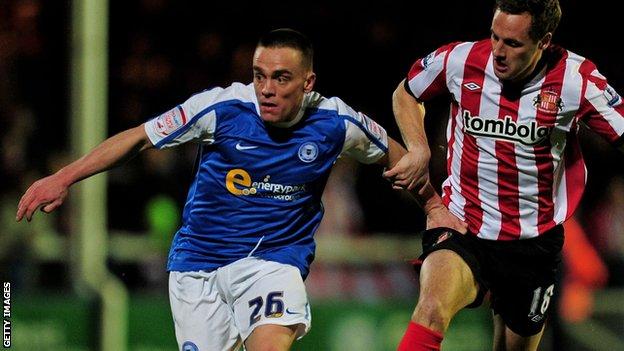 Ipswich have signed striker Paul Taylor from Peterborough for an undisclosed fee and agreed a season-long loan for Celtic's Daryl Murphy.

Taylor, 24, has signed a three-year contract and told the Ipswich website: "I feel ready for the challenge here and this is a great move for me."

He joined Peterborough from Belgian football last year and scored twice on his debut against Ipswich in a 7-1 win.

Murphy, 29, has had two previous loan spells at Portman Road.

He was at the club for the whole of last season and Ipswich boss Paul Jewell admitted in May that he would like to sign him permanently but could not afford to do so.

"All over the summer I was hoping something would get sorted for me to come back here and thankfully that has happened now," said the Republic of Ireland international, who can play up front or in midfield.

It's not the end of our dealings. We know we've got to get a couple of defenders in

"I've had a long summer break, around eight or nine weeks, but I've kept myself ticking over fitness wise and I'm feeling good."

Ipswich also hoped to sign Taylor's former Peterborough team-mate George Boyd but a deal for the winger could not be completed in time.

Manager Paul Jewell told BBC Radio Suffolk: "Every deal is different and we couldn't get the George Boyd one over the line.

"Although the window closes today, it opens for us again next week. There were three or four things that could have happened but are now not going to happen before the weekend because the Premier League teams are doing business right up to tonight.

"After that there will be players available. I've spoken to a few managers who've said they will let me have players when they come available again.

"I'd say to the supporters, it's not the end of our dealings. We know we've got to get a couple of defenders in. Also, we're looking to improve elsewhere."