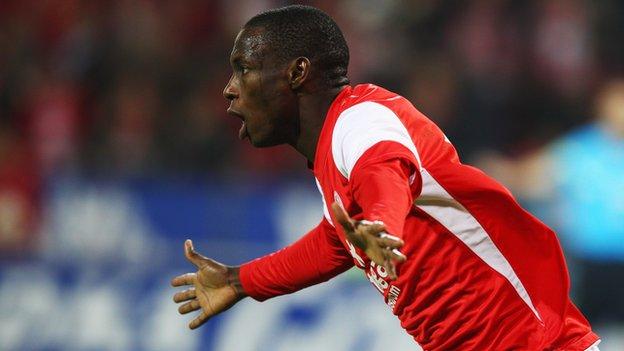 Nigeria striker Anthony Ujah has joined German side FC Cologne on a season-long loan from Mainz.

Former Olympic international Ujah only joined Mainz last summer from Norwegian club Lillestrom but has made only 12 appearances, mostly as a substitute.

And after scoring just two goals, Ujah has decided to drop down a division for regular football.

"It's a big career decision to leave Mainz in the German Bundesliga and go a step down," Ujah told BBC Sport.

"But I needed to move to get regular football and regain my shattered confidence.

"This switch to Cologne should help me to get back to my strong mental ability and enjoy football again."

Highly revered in Norway after scoring 32-goals in 42-appearances for Lillestrom, Ujah was rumoured to be heading back there to join Molde.

But Mainz who snapped him up despite interests from Denmark, Holland, Ukraine, Sweden, UAE and France, refused to sanction a move.

"I'm glad Mainz have given me a chance to go somewhere I could play football again," he said.

"I've got a big chance in the Bundesliga 2 which is a competitive league.

"I listened to the offer from Cologne and I want to be a part of history by helping the club make an instant return to the Bundesliga.

"Regular football on the pitch is greater than a Bundesliga player on the bench.

"This is a big opportunity to prove to myself that I can score goals if given a chance."

Ujah began his career at Nigerian side Warri Wolves before joining Lillestrom on a four-year deal in February 2010.