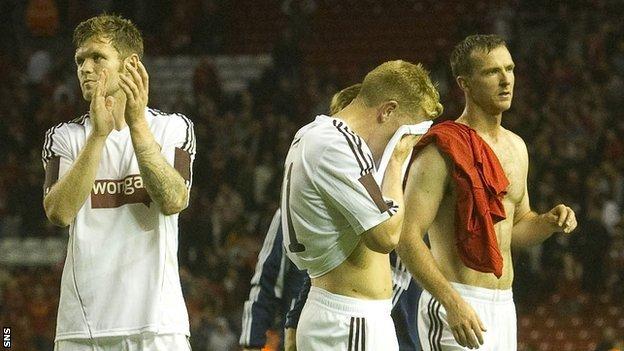 Friday's Europa League group stage draw features none of the four Scottish clubs who made it to the qualifying rounds.

That will not come as a shock to any follower of the Scottish game as it underlines the gradual decline that has taken place.

Hearts emerged with greatest credit from the qualifiers, punching above their weight as they

But while their performances will live long in the memory of the supporters, particularly those who followed them to Anfield, the harsh reality is that competing in the Europa League and Champions League proper has become an increasingly difficult task for Scottish teams.

Their own ranking in Europe and the fact they entered the qualifiers in what is known as the champions' path ensured they avoided more difficult opposition.

But even they, assuming they win the Scottish Premier League this season, will have further obstacles to overcome in future to reach the group stages.

For as a result of Scotland's dwindling coefficient points, not only will there be just one Champions League place on offer for at least the next two seasons, but the champions will have to play three qualifying rounds.

Scotland will drop from 15th to 18th in the ranking system Uefa uses to calculate the number of European places granted to countries, and at what round the respective clubs enter.

That also means the amount of Europa League places drops from four to three - actually not a bad thing when it comes to gaining coefficient points as they are divided by the number of teams a country enters.

But again, the Scottish Cup winners will enter at the third qualifying round, rather than the play-off round as Hearts did this season, and second and third in the SPL will have to go through three qualifiers to reach the group stage - a pretty remote possibility.

And it gets worse. Coefficients are based on performances over five seasons and Scotland is about to lose season 2007-08, the year Rangers got to the Uefa Cup final and Celtic reached the last 16 of the Champions League.

The loss of those points means, at this stage, Scotland would drop to 26th for the season after next, a position from which recovery is immensely difficult.

While that would not affect the round at which the champions would enter the Champions League qualifiers, the Scottish Cup winners and SPL runners-up would go into the Europa League at the second qualifying round and the third-placed team at the first.

Scotland is now caught in a vicious circle where teams face higher-ranked clubs in the early stages, making it more difficult to progress and gain coefficient points, which in turn diminishes the country's standing in Europe yet further. And so it goes on.

A good run for Celtic leading either to the knock-out stage of the Champions League or to the latter stages of the Europa League is now absolutely vital if this trend is to be reversed.

The days of having two clubs in the Champions League - even the qualifiers - and at least one in the group stage of the Europa League will soon become a distant memory if not.

So Neil Lennon's side really do carry the fortunes of a nation - not just a club - on their shoulders.