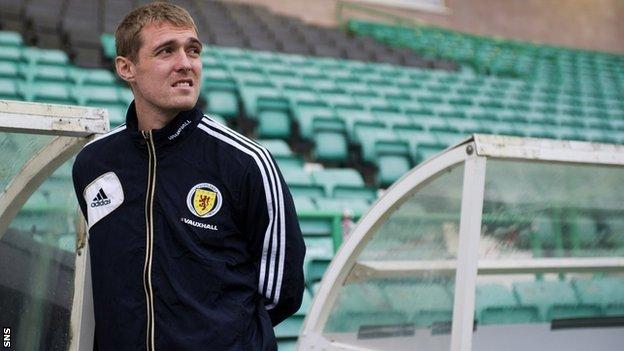 Scotland captain Darren Fletcher will once again join up with the squad next week as he continues his recovery from a chronic bowel condition.

Fletcher, who , is likely to be included in Manchester United's 25-man Champions League squad.

"He's back to his normal weight from two or three years ago. It's a case of wait and see."

Fletcher made a substitute appearance in United's recent friendly defeat by Aberdeen at Pittodrie and his last competitive match was in November.

"We haven't finalised the Champions League squad yet - we're looking at that at the moment," added Ferguson.

"But Darren comes into the 25-man squad quite easily, without me having to leave others out because we have a number of players who we don't need to register because of the time they've spent with us as an Academy player.

"He's training well every day and played really well the other night for the Under-21s.

"If he keeps doing as well as he's doing then obviously he'll be under consideration because he's a fantastic player."

Meanwhile, Rhys McCabe has been called up to the Scotland Under-21 squad ahead of their European Championship qualifiers against Luxembourg and Austria.

The Sheffield Wednesday midfielder replaces Stoke's Jamie Ness, who was forced to withdraw due to a groin strain.