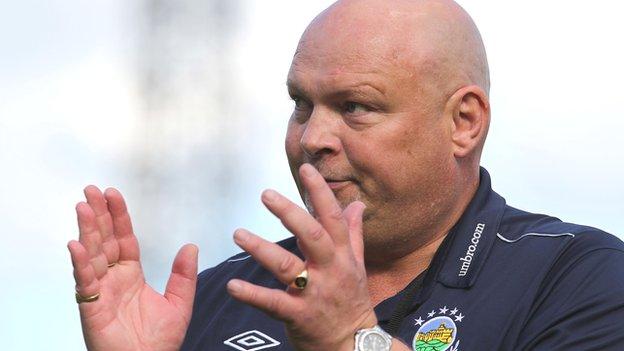 The Blues won the title last season but lost all four league games against their Big Two rivals.

"Last season it was a case of Glentoran winning the battle but we won the war," Jeffrey told the club website.

"It is not easy to be beaten by your fiercest rivals and we are certainly looking to make up for that, although it is going to be very tough."

Both teams have made significant signings before the transfer window closes, with the Glens bringing in former Northern Ireland player Stuart Elliott and defender Johnny Black joining Linfield.

Elliott, who is returning to the Oval, is not yet fit enough and misses out but former Coleraine and Glentoran player Black could make his Blues debut.

Early pacesetters Coleraine host Cliftonville, who will move above the Bannsiders if they claim all three points at the Showgrounds.

"I watched Cliftonville against Glentoran last Saturday and they played very well, despite being down to 10 men for most of the game," said Coleraine boss Oran Kearney.

"I know Tommy Breslin well from having been on the Pro Licence course with him and he likes his team to keep the ball on the ground and play good football, so it should be a good game, but a very tough one for us."

Premiership newboys Ballinamallard have made an impressive start to life in the top flight, with the Fermanagh club unbeaten and second in the standings.

The Mallards face a tough task on Saturday with a trip to last season's double cup winners Crusaders.