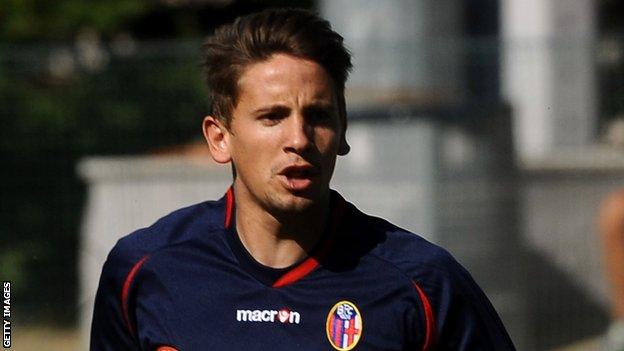 Southampton have completed the signing of winger Gaston Ramirez from Italian side Bologna for an undisclosed fee.

The Uruguay international, 21, has signed a four-year contract.

"There is a lot of ambition at this club and we are all delighted Gaston is joining us," said manager Nigel Adkins.

Saints have also signed American goalkeeper Cody Cropper, 19, following a trial, while striker Billy Sharp has joined Nottingham Forest on a season's loan with a view to a permanent move.

Ramirez, who made almost 60 appearances at Bologna after joining from Uruguayan club Penarol, has been capped 10 times by Uruguay.

"A lot of hard work has gone in from the club with a lot of negotiations behind the scenes to get this deal done," added Adkins about the club's record signing.

"Great credit to everyone because we have a young, exciting talent joining us who is one of the best around.

"The chairman has gone and backed this deal big-time with the financial outlay, and what we have got is one of the most exciting prospects in world football coming to St Mary's."

Cropper spent the previous two seasons with Ipswich Town, where he made the first team's substitutes bench on three occasions.

However, after being released at the end of the 2011-12 campaign, he was given a trial by Saints.