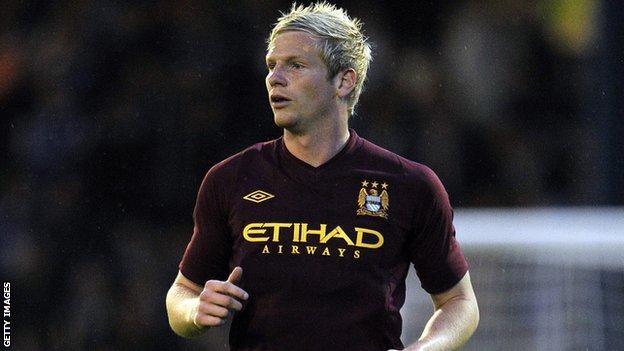 He arrives as fellow defender Sean O'Hanlon's contract with Hibs was cancelled by mutual consent.

The 22-year-old left-sided McGivern, who has 16 full caps, has joined the Scottish Premier League club until January.

McGivern has made one appearance for City, as a substitute in a 5-0 league win over Sunderland in April 2011.

But he has played 75 games during loans with Morecambe, Leicester, Walsall, Crystal Palace and Bristol City.

McGivern told Hibs' website: "I'm just really excited about playing for Hibernian and helping the team to do well in the SPL."

"Obviously growing up in Northern Ireland, I'm well aware of what the SPL is all about - it's a good, competitive league with passionate supporters.

"Hibs have enjoyed a decent start to the SPL season so far; I'm looking forward to be able to help to build on that start."

David Stephens headed to League Two outfit Barnet on a free transfer after failing to command a regular starting place at Easter Road.

The 29-year-old O'Hanlon had signed a two-year contract last summer after leaving Milton Keynes Dons but had fallen out of favour under Fenlon.

Callum Booth moved on a year-long loan to Livingston, Jordan Foster will be on loan to East Fife until January, while Scott Smith has also been farmed out to the Second Division club, initially until October.