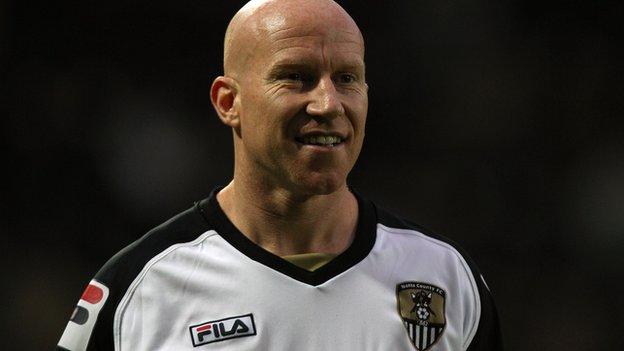 Lee Hughes's late winner took Notts County top of League One as they came from behind to beat Shrewsbury Town.

Francois Zoko started a spree of four goals in seven second-half minutes when he put Notts ahead from close range.

Matt Richards then fired Town level from the spot after Dean Leacock had fouled Marvin Morgan. And, 60 seconds later, Town defender Jermaine Grandison fired home a stunner to make it 2-1.

But Jeff Hughes headed Notts level before Lee Hughes nipped in to win it.

The second-half goal rush began on 57 minutes when Jeff Hughes centred for Zoko to tap home.

Richards then levelled when he sent Bartosz Bialkowski the wrong way from the penalty spot after Leacock was adjudged to have pulled back Morgan.

Shrewsbury then took the lead a minute later with a wonder goal from full-back Grandison, who went on a stunning individual run before slotting calmly past Bialkowski.

But the lead lasted barely two minutes before Jeff Hughes looped a header over Chris Weale.

And it was left to substitute Lee Hughes to slot home his side's 88th-minute winner - the 186th league goal of his career.

"It was a good game of football. I thought it was two committed teams, two slightly different styles of play.

"I said to Colin West on the side of the pitch after 20 minutes that I thought it was the best start to a game that we've had since we've been here.

"The passing and movement in our play was evident and replicated a lot of things we have been doing on the training ground."

"It's criminal to concede a winner five minutes from the end away from home like we've done.

"If you examine the goals, we have played a major part in our own downfall.

"You can't defend at this level or any level like we have done. It was very naïve."