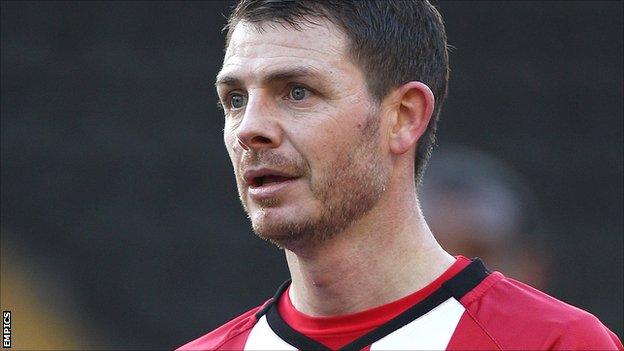 Jamie Cureton scored twice for Exeter, who held off an Oxford comeback to make it four straight league wins.

Veteran striker Cureton put Exeter ahead from the edge of the box and Scott Bennett nodded in a second.

An individual effort from Cureton made it 3-0, but back came the hosts with Jake Forster-Caskey's penalty and a close-range effort from Alfie Potter.

But John O'Flynn made the game safe on the counter attack and Oxford later had substitute James Constable sent off.

He was dismissed for two bookable offences, committed within a minute of each other.

Deane Smalley had earlier missed an excellent opportunity to level the scores at 3-3 and complete what had seemed an unlikely turnaround at the Kassam Stadium.

For 50 minutes, Chris Wilder's side were unable to recreate the form that saw them out of the Johnstone's Paint Trophy in midweek.

The second of Cureton's brace, which made it five goals in five games for the 37-year-old, sparked Oxford into life, but the U's could not avoid a first home defeat of the season.

Exeter are up to second in the table, a point behind leaders Gillingham.

"We were the architects of our own downfall today. I thought last week was a one off but it wasn't.

"The first 10-15 minutes were spot on, we controlled the game made one or two poor decisions and then one of them obviously led to the first goal.

"We want to be an effective side but I thought we were just a pretty side in the first half.

"We didn't get beyond them and didn't play with enough width and could not get around the back of them. We were too content to just play in front of them. We didn't take a gamble and didn't flood the box.

T"he stuff we do day in, day out we didn't do today"

"I made sure in the lead up to the game that the players knew this was going to be a very tough task. We'd have to be very focused on defending and sustaining long periods of pressure, which we did very well.

"It was a good day, but it didn't just happen. The players earned it through extremely tough work.

"We've got players who can score goals. Alan Gow was injured today so John O'Flynn came in.

"John can score goals, he can work hard and he created opportunities for others. He scored a very timely fourth and that was the crucial goal today."